A Surprise Around Every Corner: A Conversation with Andrew Volpe of Ludo 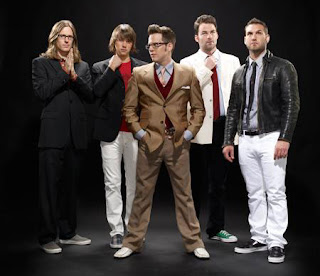 A Surprise Around Every Corner: A Conversation with Andrew Volpe of Ludo
http://www.ludorock.com/
It’s not always fun and games when it comes to St. Louis’ own Ludo. OK, that might be a stretch. Honestly, just one listen to any number of the bands songs, or simply following the story arch from their 2005 EP “Broken Bride,” a rock opera about a man travelling through time to save his wife’s life while battling zombies and prehistoric creatures along the way, will cement that idea in your brain. Hell, the band has even been known to give kazoo lessons before shows. These guys know how to keep their foot firmly pressed down on the fun pedal, but it’s their ability to mix in all things wacky and irrelevant into their mainstream pop rock sound that makes them a commercially viable entity. Sure they like to put on themed concerts once in a while (please bring back ‘Cinco de Mustache’), but that all adds to their charm and overall success. Success which includes not only a five album deal with Island, but also top ten singles (2008’s “Love Me Dead”), tours alongside the likes of Relient-K and the Presidents of the United States of America and even slots of bit time festivals like Lollapalooza, SXSW and Warped Tour.
Surely these guys must know what their doing.
In order to help try and unravel the bands mystery a bit, I spent a few moments with enigmatic frontman Andrew Volpe to attempt to pick his brain a bit on how the band are able to spin such delicious yarns, and whatever other overall zany-ness we could get to along the way.
Oh, and they have a new record dropping this August (8/17/10), so make sure you stay tuned for details.
Get eXposed Music: First off, why the decision to re-release old material as opposed to just writing new stuff? Lazy I assume?
Andrew Volpe: Mostly lazy. We figured we'd call the project, "Same Songs, More Money." Actually that is not the case. We had gained a lot of new fans with the release of our album "You're Awful, I Love You" and wanted those new fans to hear our old stuff, so we decided to make it all widely available.
GE: Can you tell me where the band name came from? I’ve been wondering that for some time now.
Volpe: Depends on who you ask. It's an ancient board game that resembles Parcheesi. It also means "crazy" in Serbian. It sounds good when you chant it too.
GE: Speaking of the re-releases, the songwriting on the full length is so delightfully tongue-in-cheek. Are you that creative or just certifiably insane?
Volpe: Well thank you. I don't believe we've received any certifications.
GE: In my opinion, ‘Good Will Hunting By Yourself’ is one of your best songs. Tell me – is it based on a true story? And if not, what influenced writing it?
Volpe: That all came about because a friend of mine told me he was going to go watch "Good Will Hunting" with a girl so that he could "get some." I thought it would be amusing to speculate: what if they built an entire relationship around that dynamic? What if that relationship ended?
GE: Sticking with that thought, ‘Laundry Girl’ has some of your best lyrics. Any chance the song is based on a real laundry girl in your life?
Volpe: I do my own laundry. That song started because I was rather lonesome at the time and was sick of doing laundry, and thought if there were some mystical nymph with a penchant for cleaning clothes, I could kill two birds with one stone.
Email Post