Sonny and the Sunsets signs to Fat Possum 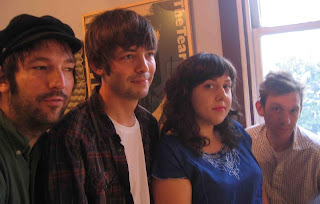 Sonny and the Sunset's vintage-style west coast pop songs tell sordid tales of death, drowning, outcasts, heavenly visions and otherworldly despair. Their newest LP, Tomorrow is Alright radiates with a classic yet indefinable sound, almost like a futuristic 50's R&B.
California native Sonny Smith started his career playing in a blues piano bar nestled in the mountain towns of Colorado at the age of eighteen. He then embarked on a journey to Central America, where he lived on an organic farm in the Central American jungle, earning money while touring with a rag tag busking band and playing hotels and cabanas along the coast of the Caribbean. In 1996, he moved back home to San Francisco, where he continued to focus on writing music, short stories and plays. In the early 2000's he toured in support of Neko Case and Jolie Holland and released a string of solo albums titled, This is My Story, This is My Song, Sordid Tales of Love and Woe, One Act Plays and Fruitvale. Tomorrow is Alright continues his exploration of outcasts, weirdos, freaks, death, love and atypical transformation.
Sonny and The Sunsets will drop "Tomorrow is Alright" via Fat Possum/Soft Abuse Aug. 31, 2010.
Myspace: http://www.myspace.com/sonnythesunsets
Artist page: http://www.sonnysmith.com
Label page: http://fatpossum.com/
MP3: "Too Young To Burn" -http://www.forcefieldpr.com/sonnytooyoungtoburn.mp3

kfink said…
Thanks for supporting Sonny & the Sunsets!