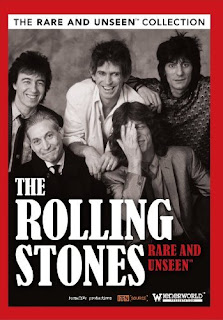 The Rolling Stones: Rare and Unseen
A Rolling Stones documentary without any live music? Yes, that is exactly what you are getting with “Rare and Unseen,” a new, mostly never-before-seen, glimpse at the career of one of rock music true legendary acts in the Stones. Now, don’t be so quick to pull the plug because you read that headline for “Rare and Unseen” is well worth your time. It is brimming with ‘new’ footage consisting of private films of the band, newsreels, photographs from personal collections, interviews, and TV appearances, most of which have yet to be seen by public eyes, some of which hasn’t been seen in over three decades. The interviews housed on the DVD are tremendous as you’ll get the opportunity to hear from band members throughout the years like Brian Jones, Mick Taylor, Bill Wyman, Charlie Watts and, of course, the man, the myth, the legend, Mick Jagger, though it probably would have done more good to have organized them in some better fashion, rather than just tossing them in chronologically jumbled as they are. The footage stems all the way back to 1964 to a fresh faced Rolling Stones group, and chances are, you have forgotten most of what you are going to see on “Rare and Unseen.” If you have, don’t’ worry, you’re in luck, because here it all is once again. “Rare and Unseen” touches on a wide variety of topics, including Jagger’s girlfriends through the years, marriage, gearing up to tour Russia for the first time in the early 1980’s, as well as uber-interesting and horrifically ironic footage of Jagger appearing on television to speak about three things he hasn’t exactly been in high standing with throughout the decades – responsibility, drug use and the law. Be prepared the laugh at the irony. And speaking of, the DVD also hosts footage of various members of a young Stones outfit speaking about their personal expectations for the band, and just how long they think the band will last. Well, it should be pretty safe to say by now that none of us have to worry about the longevity of this group. A lot of “Rare and Unseen” is more informational than visual, which might turn off some viewers initially, though it should provide enough to satisfy each and every Rolling Stones follower.
Email Post