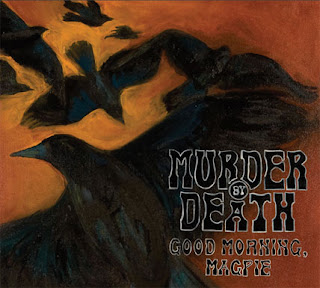 Murder By Death
"Good Morning, Magpie"
Vagrant
"Good Morning, Magpie" seems a story best befit to be told while perched at a smoke laden tavern after ordered two-fingers of your favorite scotch, despite how you order it, neat or on the rocks. Hell, this record might be better suited for consumption after ordering a double (no, that’s not a negative connotation). The albums careening honestly cuts through the smoke and the haze of the bands dark Midwestern indie sound time and time again and while the record on the whole isn’t a conceptual effort like the band has offered in the past, it has stories to tell regardless. Songs like 'As Long As There is Whiskey in the World' and 'King of the Gutters, Prince of the Dogs' tell tall tales of personal hardships and the art of endurance, while the title track and 'You Don’t Miss Twice (When You’re Shavin’ with a Knife)' instill a foreboding, yet somehow upbeat, sense of unrealized dread in the listener. It’s that sense of anxiousness and nervous energy that drives "Good Morning, Magpie," even though reasons for such feelings never seem to materialize. The record plays fast, so listen up, though the bands booming percussion and dramatic flourishes should be enough to hold your attention throughout. "Good Morning, Magpie" is a disc that does more than enough to please longtime admirers of Murder By Death, and enough to draw in casual listeners for a spin or two, or perhaps even three. (www.murderbydeath.com)
Grade: A
Email Post