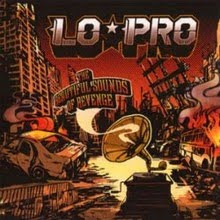 Lo-Pro
“The Beautiful Sounds of Revenge”
Rocket Science
It’s been seven years and one off EP (2009’s “Letting Go”) since we’ve heard from the on-again, off-again act Lo-Pro, and along the way they have played in various other bands and welcomed a new bassist (John ‘Tumor’ Faynestock (Snot/Amen) having been replaced with Jerry Oliviera), the band sounds refocused and rededicated to leaving their past in the past, focusing squarely on their future, beginning with just their sophomore release, “the Beautiful Sounds of Revenge.”
This record is littered with giant, melodic rock hooks primed to make the transition from wax to arena stage, though some of them might be a bit too generic for their own good. Now, that’s not to say that these songs couldn’t succeed at radio if given the opportunity, because that couldn’t be further from the truth. It’s just that some of them might end getting lost in the shuffle. “The Beautiful Sounds of Revenge” offers a pretty even-keeled smattering of soaring melodies fueled by the bands technical prowess and tight musicianship (‘Blame Me,’ ‘Texas’) and radio ready ballads ready to have your lighters waved along to (‘A Life That’s Just Begun,’ ‘All I Have’), though the band is at its most dynamic during the middle stages of the disc, when they effectively blur the lines stylistically (‘Ingenious,’ ‘Hang On’).
Frontman Pete Murray resembles mid-90’s Richard Patrick at times (‘Early Morning Anger,’ ‘Breathe’) on the record, but he doesn’t come off as groundbreaking.
“The Beautiful Sounds of Revenge” is a tangible addition to the already deep pool of rock releases that have streeted this year, one that does not deserved to go unheard or overlooked.
Grade: B
Listen to: ‘Ingenious’
Email Post