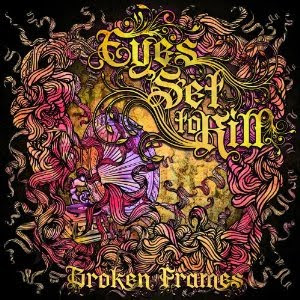 Eyes Set to Kill
"Broken Frames"
Breaksilence/Koch
Think of "Broken Frames" as something of a power struggle, a constant, yet jerky, ebb-and-flow of beautifully stunning melodic segments and aggressive, abrasive screams. Though this aesthetic has always been the calling card of Eyes Set to Kill, the bands’ modus operandi gets a slight makeover somewhat on their third studio release to date, "Broken Frames." With this record ESTK welcome in new screamer Justin “Cisko” Denson, replacing the departed Brett Anderson, who, unfortunately for fans and the band themselves, really started to find his vocal niche on 2009’s the World Outside, though he badly damaged his vocal chords in the process. Still, the premise of the record remains the same. "Broken Frames" is best suited when placed in the uber-capable hands of frontwoman Alexia Rodriguez as evidenced by standout songs 'Ticking Bombs,' 'Ryan,' and 'Two Letter Sins.' It’s when Rodriguez is at front and center that "Broken Frames" is at its most dynamic, as her superb ability to carry a melody and a hook causes the record to become massively appealing. Her effervescence however, when coupled with the fairly mediocre offerings from Denson, turn "Broken Frames" into something of a Jekyll-and-Hyde affair, one that shows flashes of brilliance, though not all of it needs to be heard. You’re better off seeking out a handful of tracks as opposed to the entire record (the Rodriguez solo tracks come recommended), unless you know, you’re into the whole post-hardcore, screamo thing, then by all means, have at it.
Email Post