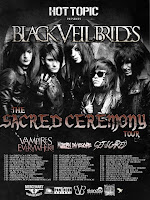 Black Veil Brides will hit the road in support of We Stitch These Wounds, headlining the Hot Topic Presents: The Sacred Ceremony Tour, along with Vampires Everywhere!, Modern Day Escape, and Get Scared. The six-week trek is set to kick off in San Diego on July 2nd.

The band has also updated their MySpace profile (www.myspace.com/blackveilbrides) with a special video message from vocalist Andy Six. The video can be viewed directly at: http://www.youtube.com/watch?v=9hOvbc6h-yA.

Black Veil Brides formed in 2007, rallying behind the message “Be yourself, and don’t let anyone tell you otherwise,” while drawing on the musical influence of Alice Cooper, Misfits, KISS, and Motley Crue.
Delivering songs with lyrics of hope and strength, accompanied by passionate, hook-laden instrumentals, Black Veil Brides took the rock world by the throat with their first single/video, “Knives and Pens”, in the summer of 2009. The music video has since been viewed more than 9.5 million times on YouTube, and can be seen at: http://youtube.com/watch?v=gFDCHdKbKBY.
Riding the success of “Knives and Pens”, and a brief headlining tour, the band promptly headed into the studio with their manager-turned-producer, Blasko, to begin recording We Stitch These Wounds, before hitting the road again as part of the Royal Family Tour, alongside From First to Last, Eyes Set to Kill, and Confide.
The band’s continued success earned them shelf-space in Hot Topic stores nation-wide, where their merchandise has ranked as high as number two in sales.
With a thriving and dedicated following of fans (The Bridesmaids), and a highly trafficked MySpace profile (averaging over 10,000 plays a day, peaking in the 9th spot on MySpace’s Top Music Charts in the ‘Metal’ category), Black Veil Brides stand out as LA’s lone breath of fresh air.
Stay tuned to www.myspace.com/blackveilbrides for more news/video updates.
Email Post