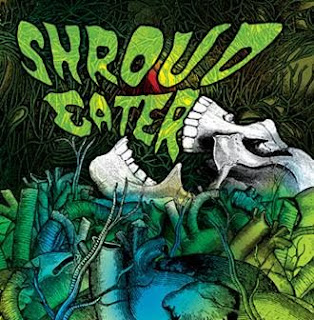 Shroud Eater, South Florida’s DIY grunge/stoner rock trio, is offering a free download of their debut self-titled EP, in anticipation of the release of their debut full-length record, ThunderNoise, due out this fall. Inspired by all things dark and dirty, including 70’s heavy metal, and 90’s grunge/stoner rock, the three-song EP can be downloaded at: http://www.raig.ru/AT_shroudeater.asp.

"We had always seen the EP as a way to distribute our music for free to as many people as possible - it's a basic primer on who Shroud Eater is as a band, and hopefully it left people curious and interested in hearing what we can really bring to the table,” states guitarist/vocalist Jeannie Saiz. “For the ThunderNoise sessions, we have some surprises up our sleeves, and are positive that the finished album will rock your ass off.”

The EP was recorded last year at Relax, Bro! recording studio, in the band’s hometown of Miami, and it was mixed and mastered by Jonathan Nunez. Artwork comes courtesy of Shroud Eater’s own Jeannie Saiz.
The EP is also available for streaming on the band’s official MySpace page at: http://www.myspace.com/shroudeaterrocks, while a music video for the record’s opening track, “We Are Beasts”, can be viewed at: http://vimeo.com/7033153 (directed and edited by Alvarez Bros. Productions).
Shroud Eater solidified their line-up in January 2009, sporting a sound of down-tuned, overdriven guitars, a thunderous rhythm section, and raw vocals of impassioned fury. After only a few short months, the band hit the Miami rock scene like a hurricane with the release of their debut EP later that winter.
Shroud Eater will once again head into Relax, Bro! this summer to begin recording their full length debut, ThunderNoise. The band will call on the acclaimed Nick Zampiello (Torche, Converge, Against Me) of New Alliance East for mastering.
Email Post