They Are, We Are, All “Heirs to Thievery:” A Conversation with Misery Index’s Jason Netherton 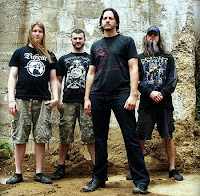 They Are, We Are, All “Heirs to Thievery:” A Conversation with Misery Index’s Jason Netherton
http://www.miseryindex.com/
Baltimore’s Misery Index are set to unleash such a fury on the world, a collection of deathgrind metal so massive it’s perhaps not ever been witnessed, with their latest album “Heirs to Thievery.” The record is the follow-up to the bands well-received 2008 release “Thievery.” The band put a lot of time into this work, something that really cuts through the sonic fury of the music itself, something that really will pay off for the band in the long run.
In order to get all my facts straight on “Heirs to Thievery” and everything that comes along with the release, I had to track down singer/bassist Jason Netherton, who was gracious enough to lend me his ear and insight on a variety of topics, including everything you could possibly need to know about this new disc.
Get eXposed Music: Let’s start with the most important thing here, your new album “Heirs to Thievery.” Walk me through the recording process of the record.
Jason Netherton: Well, let’s get to the real start. It had been 18 months since "Traitors" and we just felt with this one, a bit more quickly inspired than before. We had riffs pouring out of our collective imagination, and so after the summer festival touring season ended last year, we decided to go ahead and just stop touring and block off the entire autumn and early winter of 2009 to write and demo a new album. The result is "Heirs to Thievery," and we are very happy with it. Creativity with us is entirely spontaneous, and since we all write songs, we have a large pool of music to draw from when we organize our albums, and ultimately makes our records very diverse and dynamic (at least we hope!). On the recording process, we wanted to stay local this time. Every album we have done to date we have had to drive hundreds of miles away, and live in a hotel or someone's house for a month, and this time we wanted to stay home, save the money and put it towards the record, and have a more relaxed approach.
GE: Who did you get to produce, and how did you settle on that choice?
Netherton: Baltimore producer Steve Wright was our natural first choice because although we recorded "Traitors" in Boston, we had Steve mix and master it. So, he already has made previous contributions to us, and it was a pleasure doing the "full album" with him this time around.
GE: Tell me about the title of the record. It sounds as if it could air a bit on the political side of things and/or the overall sentiment of leadership in our country, but perhaps that’s me reading far, far too into it.
Netherton: The album title sums up the idea and criticism that should not be forgotten among many wealthy, formerly colonial western nations - the land you live on and prosper in was systematically expropriated and taken from indigenous peoples who lived in harmony with the land before notions of property rights and nation states arrived to enslave them. Primarily, it is an alternative to the United States' Walt Disney-fied story book history that looks at our much heralded nation from the perspective of the exploited, the oppressed, the enslaved, and the forgotten. It's just a friendly reminder that all this land and wealth did not materialize instantly for so-called 'good Christians' and patriots to dominate and gluttonize for their own endless self indulgence. PS. Always look on the bright side of life!

GE: Staying on that topic, does the title of the record suggest that there might be a running, or central, theme to the record?
Netherton: It is just the centerpiece for the album, the title track and ‘the 7th Cavalry’ are the two connected songs to that theme, and we just wanted to use that to promote the imagery for the album and provide a new lyrical focus on American history, as well as the other every day subjects we like to cover in the lyrics.

GE: Tell me about some of the things that influenced this record, whether it’s musically, lyrically, etc.
Netherton: Here is a breakdown on a few tracks....
-----‘Fed to the Wolves’ - This one is about the indoctrination system that is public schooling, crushing imagination and fueling normalized fealty to the prevailing order.
------‘Embracing Extinction’ - Laments the state of mankind's proclivity for brilliance and creativity, while being simultaneously an inherently self-destructive being.
-------‘The Carrion Call’ - Details the aftermath of the planet without humans, who perishing in a plague, fertilize the earth with their corpses and give birth to a new "Eden" where the animals return to ecological balance with all of nature.
-------‘The Spectator’ - Covers the growing realization of one particular alienated suburban man, and his crisis of mind when he realizes he sacrificed his childhood dreams for a stale job, a boring life, and a lot of shit in his house he does not need.
-------‘Sleeping Giants’ - Discusses the horrific nature of human trafficking across the world, and the way this often overlooked crime is fueled through prostitution and capitalism and tolerated by governments.
GE: How will “Heirs to Thievery” differ from your last disc, “Traitors?”
Netherton: Well, riffs and songwriting is always an area we strive to improve upon, and that we feel we accomplished and then some. The comments we are getting on the new record are far and away positive in regards to how the songwriting itself has matured extensively, and we feel the 11 track collection represents the pinnacle of what we are aiming for at this time - balanced songwriting, creative riffs, great, clear production, and a tight early 90s death metal vibe all around.
GE: What will the rest of 2010 bring for Misery Index?
Netherton: We are planning on US and Canada tours over the next five months or so, and then perhaps a late autumn run in Europe, its all in the planning stages, so until then, we are waiting to bring the music to the people!
GE: Anything else you’d like to say to the readers? Anything you’d like to add?
Netherton: ‘Have a good time, all the time!’ (Viv Savage)
Email Post