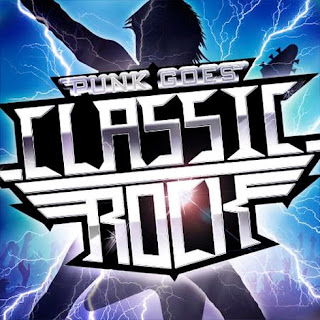 “Punk Goes Classic Rock” is proof of one thing for sure – the entire “Punk Goes…” series has come a long way since 2000, when “Punk Goes Metal” saw a release. Throughout the years, there have been eight other releases of its kind that had Punk going Metal, Pop twice, Acoustic twice, 80’s, 90’s and even Crunk, but “Punk Goes Classic Rock,” the now ninth edition of this (somewhat) heralded and lauded series, is by far the most polished of them all, and is one of the very best of them as well.

First off, any record that involves the likes of Boston and Journey is a home run, even if only those bands’ songs are seeing a makeover. Hit the Lights get things underway with Boston’s ‘More Than a Feeling,’ an excellent powerpop version of the timeless track, but it would have been cool to see the band try their hands at the ‘Foreplay’ intro, but beggars cant be choosers, right? Its fun nevertheless, and speaking of Journey, A Skylit Drive takes on ‘Separate Ways (Dreams Apart).’ It gets a little off topic due to its post-hardcore feel and at times too aggressive vocals, but hey, that’s A Skylit Drive’s MO – it’s what they do. The same could be said for I See Stars take on the painfully underrated Outfield song ‘Your Love.’ The heavy dose of synth is pretty unnecessary, and some of the vocals miss the mark, but again, this is what this band does, so it’s to be expected, or should be at least.

The Almost and singer Aaron Gillespie sharply handle the sizeable vocal task that is the brilliance of Tom Petty’s ‘Free Fallin’,’ but the Underoath drummer pulls it off in resonating fashion, making the song one of the overwhelming highlights of the disc. But the hits don’t stop there. Label darlings Every Avenue enlist the help of Automatic Loveletter’s (check these guys out when you get the chance) Juliet Simms for their take on Eddie Money’s ‘Take Me Home Tonight,’ a song that’s nothing short of electric and stimulating, proof that the band should think about releasing a covers record. C’mon, someone tell these guys to at least consider it? Four Year Strong did it.

If you want to get a bit technical, the bridge of Forever the Sickest Kids cover of Ozzy’s legendary ‘Crazy Train’ gets a bit lost in translation, but overall the song is relevant and surprising to be honest. Not taking anything away from the Maine and their bombastic version of Def Leppard’s cheesy sleaze track ‘Pour Some Sugar on Me,’ but we’ve heard this before (and if you haven’t, well, enjoy it, but shame on you). It still kicks ass however.

It’d be hard to imagine how anyone who listens to this album doesn’t like it. “Punk Goes Classic Rock” is one of the best this line of records has offered us yet, and even if you are a classic rock purist, you have to smile after listening to this record. It’s meant to be fun, and that’s something it does very, very well.