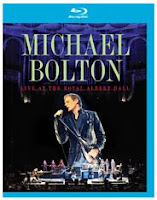 Even if you’re not a fan of Michael Bolton and his unmistakable, easy listening vocally driven music, you can’t say he isn’t a great performer. If you are one of those people, you might be changing your tune after watching his new live DVD “Live at Royal Albert Hall.”

The concert captured for this DVD release is the perfect showcase of Bolton’s unparalleled stage presence, one that’s barely rivaled in today’s industry. He is on point all night long onstage at the hallowed halls of London’ Royal Albert Hall, unleashing a bevy of songs from up and down his vast musical catalog. The set list spans the majority of his long and storied body of work, from ‘Soul Provider,’ ‘How Am I Supposed to Live Without You’ and ‘How Can We Be Lovers’ from 1989’s “Soul Provider” to the shows closing song, “Just One Love,” taken off of last years album of the same name. The show also features ‘Murder My Heart,’ the song he penned with Lady Gaga and number one hit ‘When a Man Loves a Woman.’

Bolton takes the time to toss in number of cover renditions as well, including Ray Charles’ ‘Georgia on My Mind’ as well as two from his “Bolton Swings Sinatra” release, timeless tracks ‘Fly Me to the Moon’ and ‘That’s Life.’ These songs are performed so well, so close to the originals that Bolton and “Live at Royal Albert Hall” should draw in even non-convention Bolton fans.

“Live at Royal Albert Hall” features a small amount of extras for those looking for some, which should be everyone. There are two additional performances, “New York, New York” and “Nessun Dorma,” tossed in, and a sit down interview with Michael himself.

All in all this is a flawless release. His backing band could not have been better. The shows sound is crisp, the visuals are alluring, bright and colorful, and Bolton is at the top of his game, doing what he does best – being Michael Bolton.