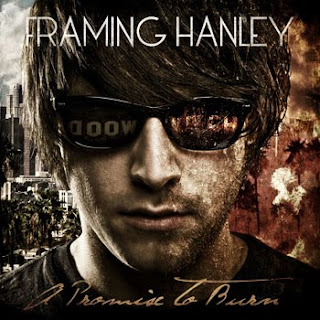 Framing Hanley
“A Promise to Burn”
Silent Majority Group
Framing Hanley has released but one album, 2007’s excitingly fresh ‘the Moment,’ and while that’s hardly enough of a body of work to cement any sort of identity, whatever one the band cultivated with their previous release is lost on their sophomore release “A Promise to Burn.” Sure, the band must have realized that they needed to make some minor tweaks in order to stay more relevant – just go ask 10 Years and Evans Blue where this sound got them – but that’s besides the point.
“A Promise to Burn” is a literal hodgepodge of sounds, most of which stray from the bands initial nu-metal tinged hard rock they have become known for. Though it should bring in legions of new fans, it might do just as much to alienate current fans through its use of pop rock tracks seemingly built for mainstream radio play. One thing the band has going for them is that frontman Nixon still holds the microphone. His is one of the best young voices in the rock game, and even though its semi-criminal that his voice is a bit wasted on some of these tracks, his vocal muscles are able to be flexed on “A Promise to Burn.” Among those songs are ‘Back to Go Again,’ which sounds like a song Boys Like Girls, All-American Rejects or another band of the powerpop ilk would love to call their own, and the way-too-ballad-for-their-own-good duo of ‘Weight of the World’ and ‘Fool with Dreams.’ The band also tread that thin line between a credible rock sound and commercially viable conventional anonymity with ‘Bittersweet Sundown’ and 'Warzone,’ two tracks that further the albums lack of identity.
Of course, well thankfully maybe, not all of “A Promise to Burn” is a tire fire. The band still reserves some of their rock intensity for a few outings, namely the superb lead single ‘You Stupid Girl,’ which alongside ‘Built for Sin’ and ’23 Days,’ is the one of the bands best songs put to wax thus far, and ‘Photographs and Gasoline.’ Make sure you hit off the iTunes Deluxe edition of the record for the track ‘Pretty Faces.’
Calling “A Promise to Burn” a natural progression, or evolution, for Framing Hanley would be pushing it. If anything, the record is a lateral move, one full of surprises, literally, both good and bad, with each new track. It could really go either way - you’ll have to make a judgment call for yourself. Yes, it’s good, but its just not as good as it potentially could have been.
Grade: B- (borderline C+)
Go Download: ‘You Stupid Girl’
Email Post