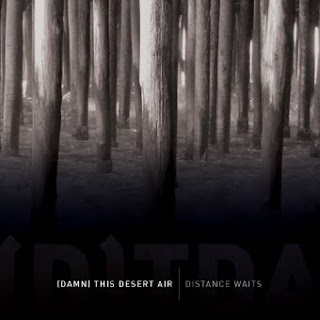 "Distance Waits" is a resounding success in terms of sound. It’s just a mere six tracks in length, though it doesn’t take but one of those tracks ('Ghost I Own') to construct a lush and vibrant, yet massively sprawling, musical landscape. This EP speaks a lot to the mantra of (Damn) This Desert Air as a band, as it is constantly searching and unafraid to experiment if the mood strikes. "Distance Waits" possesses a seemingly insatiable appetite for bigger sounds, a characteristic that gives each of these six tracks its own distinctive identity.

Arguably the bands strongest track to date, 'Ghost I Own,' opens the affair, and also ultimately closes it with the 'Division Mix' remix, but the track is just a cog in the machine when looking at the bigger picture of "Distance Waits." 'Trembles' and 'Your Atlantis' work in harmony to give the album an unyielding foundation and definite strength through hypnotic, rhythmic vocals and high arching, angular guitars, while 'Made of Gold,' a ballad of sorts, works to add miles and miles to the afore mentioned sonic-scape. 'Before Sunrise' is an entity all its own, a song that utilizes building and mounting crescendos with sizeable drum work, before crashing down like a tidal wave, raining down noise on the listener.

"Distance Waits" houses a certain intensity, a textured and layered sound that most bands (yes Thrice, we’re looking at you) could only dream of. Its high time people give (Damn) This Desert Air their do, and "Distance Waits" is just the album to make them start.
Email Post