Reviewed! As I Lay Dying - "The Powerless Rise" 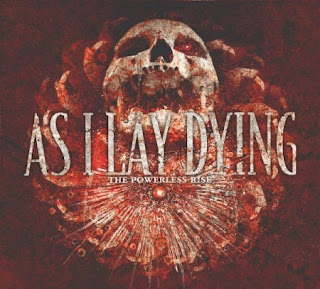 File Under: Standard Bearing Metal
As I Lay Dying – “The Powerless Rise” (Metal Blade): “The Powerless Rise” is a brutally stunning affair, a record that is truly as powerful as it is abrasive, and throughout it As I Lay Dying never fail to bring their unique epic feel to the table. Each song sounds somehow bigger than the last, something the band has actually become quite adept at over the years. As expected with an AILD release, there are those patented captivating moments of ostentatious vocal clarity strewn about (‘Anodyne Sea,’ ‘Anger and Apathy,’ ‘Upside Down Kingdom’), but this time out on “the Powerless Rise” those moments are more an exercise in brevity than they’ve been in albums past. The band spends more time spewing vitriolic bile than anything else (‘Beyond Our Suffering,’ ‘the Plague,’ ‘the Blinding of False Light’), a true return to the bands roots that finds them waxing poetic circa 2003 and “Frail Words Collapse.” The clean vocal contributions from bassist Josh Gilbert are essential to the records’ dynamic, and speaking of, frontman Tim Lambesis is as brilliant and inspiring as ever. ‘The only constant is change,’ Lambesis sings on the song of the same name – too bad he doesn’t heed his own words because “the Powerless Rise” is like most other AILD work – spectacular and near infallible - and with this record AILD stay consistent and at the top of their game, among the highest echelon of heavy bands in the scene today. (http://www.asilaydying.com/)
Grade: A+
Go Download: ‘Parallels’
Email Post