Chambers to Play Brooklyn May 14th 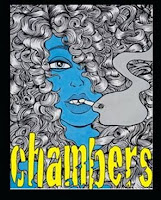 In support of their upcoming release “Old Love” on June 22nd, CHAMBERS continue to line up shows in the Northeast. CHAMBERS have just announced that they will be playing in Brooklyn, NY at The Bushwick Music Studios on Friday May 14th with Tiger Flowers, Abominable Iron Sloth and Battilus. This show follows up CHAMBERS last New York appearance opening for Dog Eat Dog at The Studio at Webster Hall.

Described as “the band to take over” and “the sound of 2010” by James Gill and Terry Beezer of Metal Hammer Magazine, CHAMBERS is a metallic hardcore wrecking ball on a mission to destroy expectations. Always willing to set a fire and fan the flames, CHAMBERS’ debut album, “OLD LOVE” is poised for a new blend of aggression and is “not for the faint hearted.”