Reviewed! I Am Virgin DVD 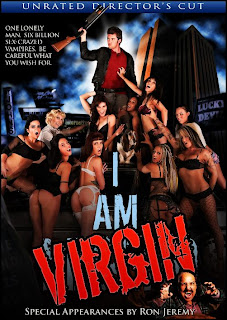 “One virgin stands alone against 6.8 billion sex-crazed vampires.” That statement alone should really tell you all you need to know about I Am Virgin. As the title might suggest, this film is a spoof of Will Smith’s I Am Legend, only this time, instead of Smith, Adam Davis plays Robby, who is the last uninfected male in a world in which all others were mutated into sex-crazed vampires, and, as the title would suggest, Robby is a virgin, a very staunch one at that. Robby is always flanked by his trust sidekick, the uber-adorable basset hound Billy, as he travels through the abandoned streets and building of Portland.

As in I Am Legend, when Smith would travel into buildings to explore and ultimately find the infected humans huddled in corners or feeding, Robby would find the sex-crazed vampires enjoying the pleasures of the flesh. The movie pretty much follows along as such, as Robby walks in on sex scenes in abandoned buildings, hospitals, sex shops, etc and meets Ron Jeremy along the way, who tells him to just go ahead and give into temptation. Eventually Robby embraces his position even though you don’t actually find out if he gave in completely. I Am Virgin is basically a long and drawn out soft-core porn, and that fact overshadows its spoofing of I Am Legend.

As you would expect, there is a ton of nudity throughout the movie thanks to a handful of sex scenes involving the vampires, who are played by strippers from the movies hometown of Portland, which speaks to the overall homegrown feel of the film. Not only are the actresses from Portland and the movie filmed there, but director Sean Skelding and screenwriter David Wester, as well as co-producer Shawn Justice, call the city their home.

I Am Virgin features a surprisingly large CGI budget, believe it or not, which led to the movie actually looking pretty good aesthetically, and from an acting perspective, things aren’t entirely dismissible. Davis isn’t bad in the movies lead, though at times it’s painfully obvious he is trying to hard to be Bruce Campbell (Evil Dead, Army of Darkness), what with his facial expressions and one liners, but thankfully it doesn’t take too much away from the overall product.

The fact that there’re other males in this film, albeit infected, was confusing, as going into the movie its sort of established Robby is the last standing male, but actually he is just the last virgin.

I Am Virgin is not as bad as some might think, yet its actually a hilarious premise, and if you like strippers and tons of chicks with a ton of tattoos, movies on Cinemax at 1am, pointy teeth and one liners, put I Am Virgin on your watch list. Fans of Twilight probably might want to pass on this one.