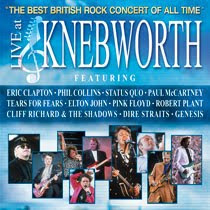 There is a reason that “Live at Knebworth,” the Silver Clef Awards Winners Show, has been touted and hailed as ‘the best British rock concert of all time.’ It was a concert that brought together the likes of Tears for Fears, Robert Plant (with Jimmy Page) and Genesis together in one night on one stage, and that is just the first half of the concert. Yes, you read that right, those three powerhouse artists are just the first half of “Live at Knebworth.” The second half you ask? Phil Collins, Eric Clapton, Elton John, Paul McCartney and Pink Floyd. Oh, is that all? So, yeah, that billing of ‘the greatest British rock concert of all time” - completely warranted.

The now famous concert from June 30, 1990 was held in honor of the annual Silver Clef Award winners (awarded for outstanding services to the British Music Industry), and took place on the grounds of the Knebworth House. The concert also raised funds for the Nordoff-Robbins Music Therapy and the Brit School for Performing Arts. The 20th Anniversary release of “Live at Knebworth” is a great reminder of just how awe-inspiring and groundbreaking the night actually was, and to add to its legend, all artists appeared for free and for charity. That’s something that you don’t see everyday.

This two-disc set is a literal highlight reel of hit songs, one that rarely ever offers anything but moments of radiance, from Tears for Fears kicking things off with their timeless ‘Everybody Wants to Rule the World,’ to Robert Plant and Jimmy Page appearing on stage together for a four song set, and Genesis rounding one disc one with not only their hit ‘Mama,’ but a surprising cover medley consisting of ‘Somebody to Love,’ ‘Satisfaction,’ ‘Twist and Shout,’ ‘Reach Out I’ll Be There,’ ‘You’ve Lost That Loving Feeling,’ ‘Pinball Wizard,’ and ‘In the Midnight Hour.’ Phil Collins comes back onstage to begin disc two with his infectious song ‘Sussudio,’ before Clapton does what he does on ‘Sunshine of Your Love’ and Dire Straits rattle off ‘Think I Love You Too Much.’ Elton John wows the crowd with ‘Saturday Nights All Right (for Fighting)’ in his eclectic fashion, before Paul McCartney dips into his bag of tricks and comes out with the Beatles’ uber-classic ‘Hey Jude,’ which is not only the best song in this collection, but also might be the best live song you will ever hear. The crowd participation mixed with McCartney’s presence and the sheer emotional feeling of the song will give you chills, and will stick with you well after you turn the record off. Pink Floyd resoundingly put an exclamation point on the night’s proceedings with ‘Comfortably Numb’ and ‘Run Like Hell.’ You would surely be hard pressed to find a better back-to-back combination to end any concert, anywhere in the world.

As far as live records go, it doesn’t get much better than “Live at Knebworth.” That whole “the best British rock concert of all time” thing seems like less of a lofty statement after just one listen.