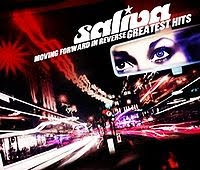 It doesn’t happen very often, but every once in a while a band releases a Greatest Hits record that actually is worth a damn. Normally these types of records are just mere filler, sharing company with live records and b-side compilations, albums released just so fans don’t lose interest in the band and/or completely forget about their existence.

Saliva’s “Moving Forward in Reverse: Greatest Hits” CD happens to be one of those rare occasions in which a Greatest Hits comp. is something of substance, even though there is only one new track included here. It stands as a reminder, or proof to some, that this band has compiled a laundry list of accomplishments throughout their 14 year tenure, even though Saliva doesn’t get the credit or respect they deserve in the rock music scene and most listeners are quick to cast them off as a “butt rock” clone. But with six studio albums under their belt and another (“Take That Society”) due out sometime this year, it was about time for a Greatest Hits release from Saliva.

The band uses “Moving Forward in Reverse” as a stage to premiere their latest track, ‘Time to Shine,’ a song very much written and executed in the same vein as other Saliva ‘pump-up’ tracks (‘Click Click Boom,’ ‘Ladies and Gentlemen’), a song that seems destined for endless amounts of sports clip highlight reels and sporting event openings. Aside from ‘Time to Shine,’ beyond the new material, this record holds a ton of merit. Though the song placement leaves a little something left to be desired (‘Weight of the World’ closing, apart from other tracks from “Back in Your System”), “Moving Forward in Reverse” sheds light on where the band has been, for those that may not know, and just how far they’ve come in terms of commercial viability and overall success. From the nu-metal styling’s of 2001’s major label debut “Every Six Seconds” (‘Superstar,’ ‘Your Disease’) and 2002’s radio friendly “Back in Your System” (‘Always,’ ‘Rest in Pieces’) to 2004’s painfully unappreciated “Survival of the Sickest” (‘Survival of the Sickest,’ ‘Razor’s Edge’) and 2007’s popular mainstream “Blood Stained Love Story” (‘Broken Sunday’), this comp. really does offer up looks at each and every era of Saliva’s career, one that is pretty storied up until now in its own right. “Moving Forward in Reverse” also features ‘Bleed for Me,’ taken from the Daredevil motion picture soundtrack and “Cinco Diablo’s” fan appreciation track ‘Family Reunion.’

Saliva’s music has appeared on countless television shows and countless sporting events. They have appeared in the top ten on the US Mainstream Rock Charts numerous times, have reached Gold and Double Platinum level status, and have kept up a long running, very lucrative relationship with sport entertainment juggernaut World Wrestling Entertainment (WWE).

Now, how many other bands can say that for themselves? Yeah, not many, if any at all.

Grade: A
Listen to: ‘Time to Shine’
Email Post