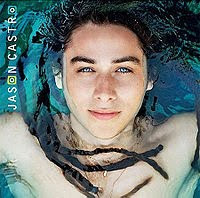 It has been sometime since we last laid eyes on the baby-faced and dreadlocked easy-going singer Jason Castro, not since his elimination from the seventh season of American Idol. He actually finished fourth that year, but his departure led to bigger and better things, as he joined the ranks of Chris Daughtry, Bucky Covington and David Archuleta, contestants on Idol who have gone onto to success despite not winning the show. Since being saying goodbye to the popular show nearly two years ago (May 7, 2008), Castro has released just one EP (“Love Uncompromised” EP earlier this year) in addition to this album, though he has kept himself busy with one off song releases. In short, it was about time for this release, which makes it confusing that it’s only another EP.

This eponymous record will send thoughts of Jason Mraz (and his trademark hat) circa 2008’s “We Sing. We Dance. We Steal Things,” but don’t be too quick to pigeonhole Castro as some type of clone. He is real and thoroughly genuine throughout the album; this music doesn’t sound forced. The album represents him well - light-hearted, sweet and sincere. He at times comes off with a bit of easy, breezy, swinging-on-the-front-porch feel, music that sounds plucked right from the recording sessions of Chris Nathan’s “Words” (‘Love Uncompromised’), though the Mraz comparisons become more and more evident the more time you spend with the record (‘Lets Just Fall in Love Again’).

Castro gets some help from Serena Ryder on ‘You Can Always Come Home,’ a blues/country affair riddled with the torture and pain of a love lost, and alongside the track ‘It Matters to Me,’ Castro displays some powerful chops, a certain vocal presence that helps to separate him from the pack. He has the ability to soulfully wail one moment, and effectively croon the next, all without losing anything in the transition. His best vocal performance on the record comes during the album’s closer, a cover of Leonard Cohen’s “Hallelujah,” but that doesn’t mean the first seven tracks aren’t admissible or ultimately passable. It just means that you are in for a smooth ride as you make your way to the album’s strongest offering.

Sure, Castro probably didn’t do himself any favors by waiting over two years to release this record, though an eight song EP to reintroduce himself to the world was a smart move. Even after that self-inflicted semi-injustice, this self titled debut is proof that Castro is more than a mere carbon copy.