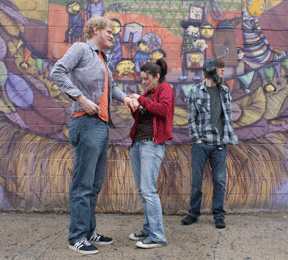 Tales of sordid relationships, friends turning against friends and broken promises aren't typical fodder for fun and energetic pop rock songs, but STEWART's Andrea Tarka isn't your typical songwriter. Acupuncturist by day, Tarka is as enthusiastic as her music suggests, proving that even the most difficult subject matter is no match for a sunny disposition. Hailing from Brooklyn, NY, Stewart is set to release their latest album, KICKS independently on June 15, 2010.
“Kicks can mean having a great time. You can kick someone, or something. You can relax and just kick it. Or kicks can refer to excitement, a ball game, or shoes. Anything really,” Tarka explains. That sort of anything goes ethos can be seen in the album’s diversity. Tarka says that though Kicks was recorded almost entirely live, as were their previous releases, this time around Stewart changed their focus, opting not to lean only on fast, hard-hitting punk rock, but to create a variety of tempos and moods. “Our older songs are all really fast and full of words, (which I love too, there is a time and place for everything), but with this one we tried to give each song more space,” Tarka says. As a result, you get songs like “Consider Me Gone,” a dangerously catchy tune featuring sizzling guitar work from Tarka and bandmate John White, coexisting peacefully alongside tracks like “Gone,” an ode to a dead ex-boyfriend, shimmering with sparsely plucked guitars and hushed vocals before slowly building in intensity. “This album has a lot more pop influence in terms of layers and dynamics than our other songs,” Tarka asserts.

STEWART is also offering a FREE download of the first track "Dance with Me" from their upcoming album KICKS: www.reybee.com/Stewart_Dance_With_Me.zip
Email Post