Kylesa signs with Season of Mist 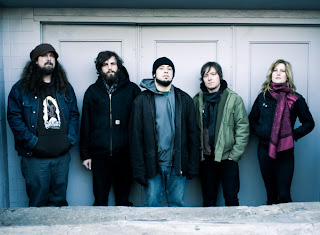 Kylesa, whose 2009 album "Static Tensions" was one of the most critically acclaimed metal albums of last year, has signed with Season of Mist with work already underway on the follow-up to the album Revolver awarded 4 stars and Spin referred to as "Midnight in the garden of drop-tuning and evil."

“We’re very happy to announce our new partnership with Season of Mist for the next Kylesa release, which we are hoping to get out later this year." said the band. "We are stoked to be working with SOM on this next album. They are a forward-thinking label and they have all been very accommodating and a pleasure to work with.”

Regarding the new album, Kylesa adds: “The writing process for the new record has been intense, taking up the better part of each day since January (that's why you haven't heard from us lately), but in return we have some new material that we're very proud of. The studio sessions at The Jam Room in Columbia start in May and end in early July; we'll try to have a few reports for you along the way.”

The band is currently touring Europe until early May and will perform at the Roadburn festival in Tilburg, The Netherlands on Apr. 15.