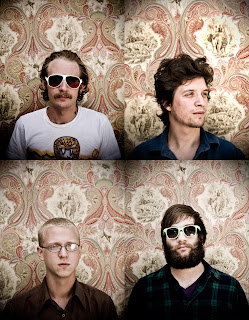 Recorded late last year at Black Dirt Studios in upstate New York, The Black Dirt Sessions is a deeply personal record from Deer Tick and most especially from lead vocalist and songwriter John McCauley. It is the sound of a band coming into its own, finding its voice and pouring its collective heart out. The comparisons that have often been thrust upon McCauley by the press seem to fall away as his own voice comes through more clearly. On songs like "Goodbye, Dear Friend" and "Christ Jesus" which find McCauley alone at the piano, about as naked as you can possibly get on record. The Black Dirt version of "Christ Jesus," which also appeared on War Elephant, manages to be even more devastating than the original.

MP3: "20 Miles" -http://www.forcefieldpr.com/deertick20miles.mp3
Clearly, the band is exploring some darker material here (like death, mortality, the existence of God) than they've touched on in the past, and it suits them. Even as the Deer Tick live show has become legendary for its raucous, spontaneous moments, this record serves as proof of the band's incredible musicianship, cohesive nature and most importantly gives us a chance to witness McCauley becoming a fully formed, mature songwriter right in front of our eyes (or ears).
Deer Tick's "the Black Dirt Sessions" drops June 8 via Partisan.