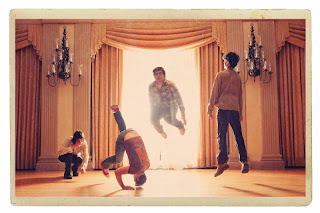 To say that the Poison Control Center's Sad Sour Future is one of the finest albums you will hear this year is such a misguided response to its soaring ambition that we might as well pack it in right now. Over 2008 and into 2009, the band's four members, living in four different cities, tethered their relationship by periodically exchanging a demo-of-the-day to document their daily life. During a week in May 2009, these four songwriters hauled more than 40 songs a collective 1,500 miles from their respective homes to a turn of the century schoolhouse on the Mississippi River filled with analog recording equipment.

The result is a double-album encompassing the motions and emotions of separation, loss and the struggles of leaving your 20s behind and growing older in your own skin, this from a band described as "dynamic, versatile, and just a little bit frightening." (KEXP).

The bands new album, "Sad Sour Future" will street May 18 via Afternoon Records.