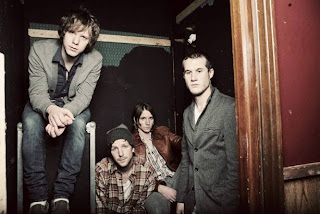 Canton, Ohio band Lovedrug is preparing for a very busy summer. In a recent interview with MishMash Magazine leader singer/guitarist Michael Shepard noted, “We're gonna tour in June and July, put out two more EPs, record a full length record, get a new record deal, move to Nashville, start our own line of sausage links and take over the world starting with Ireland. But, not in that specific order possibly.”

Now label-free, the band is releasing a series of three EPs as they continue to write the upcoming HiFi album. EP - PART I is out now on Vinyl, CD and digital format. All formats, including a limited edition package, are available directly from the band through http://www.lovedrugmusic.com/.

In the meantime, fans can listen to brand new tracks for free at www.NoiseTrade.com/lovedrug.
Playing Bamboozle at the Meadowlands in New Jersey on May 2 alongside Weezer, Minus the Bear, and MGMT, Lovedrug will also hit the road on a headlining tour with All The Day Holiday supporting, after a couple of one-off shows with The Early Hours, and Taylor Hawkins & The Coattail Riders respectively.

Now with new music dubbed by many as Lovedrug’s best work to date, the stage is set; this ain’t a comeback; it’s a breakthrough in the making.
Catch Lovedrug on tour: