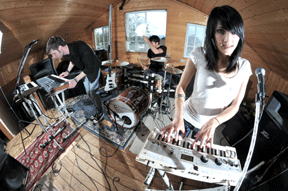 ELECTRIC VALENTINE Suffers Major TheftGear, Music, But Not Passion Get Stolen by Thieves
Just as momentum was building and picking up steam on their musical trajectory upwards, electropop duo ELECTRIC VALENTINE suffered a devastating blow - their studio was ransacked and their gear, and more importantly, all the music they have been working on was stolen. With an award for "Best Electronic Band" at last month's "2010 OC Music Awards" and a nomination for the "Dance/Electronica" category of the 2009 "International Songwriting Competition" for their song "A Night Like You" (whose winner will be announced on April 28th), this was especially awful because Chris Qualls and Lauren Baird were writing lots of new music and working on many new projects. Chris issued the statement below:


Electric Valentine needs your help. Last week, we were hit with every musician's worst nightmare: our studio was broken into and our gear was stolen. Many items were taken but the most devastating was our computer and back-up hard drives. We've been taking time off lately to work on new material and were really excited about all of it. When the thieves exited through that broken window, they took every song/idea/beat we've worked on since November with them. Everything for the second Electric Valentine full-length, the acoustic EP, all the covers and remixes we were going to give out for free, the Kids On Drugs album I was recording, the Metroid full length, etc. .. literally months and months of hard work - all gone.


To be honest, for a few days, I was so depressed that I considered just giving up on music, Electric Valentine and recording. I've never been one to quit though and I decided a better idea would be to start the whole process over and use this disaster as motivation to create the best album I've ever done. One of my good friends told me "nothing great comes easy," and I've been reminding myself of that constantly.

Here's where we need your help: The thieves took $3,500 worth of recording equipment from us and, as of right now, we don't even have the means to start over. We're asking for donations from our fans, friends and family to help us buy new gear. This is tough for us because we've always been self-reliant and have never had to ask other's for help like this. Unfortunately, we're at such a low point that we don't really have any other options. Our PayPal address is EVDanceParty@gmail.com. If you have anything that you can spare, even a dollar, we would appreciate it more than you'll ever know.
Thanks so much guys - we love you.
Chris Qualls Electric Valentine
____________


A band who has always put their fans at the forefront, Electric Valentine recently offered their debut album Automatic for a FREE DOWNLOAD here: http://bit.ly/80Q8Jo, so it's only fitting that they ask their fans for help in return. Fortunately, this tragic event is turning into a catalyst for new material. Plans for their second album and national tour have been postponed until further notice.