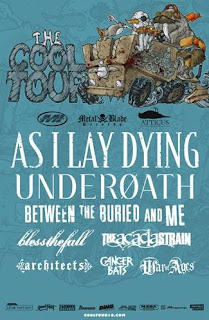 2010 witnesses the inaugural year of COOL TOUR, in association with Metal Blade Records, Atticus Black by Atticus Clothing, and Musician's Institute College of Contemporary Music, and features AS I LAY DYING, UNDEROATH, BETWEEN THE BURIED AND ME, BLESSTHEFALL, THE ACACIA STRAIN, ARCHITECTS, CANCER BATS, and WAR OF AGES. COOL TOUR is brought to you by Ibanez, Ding, Alternative Press, altpress.com, Invisible Children, Facedown Records, Mesa Boogie, Ampeg, Live Nation, The Agency Group and Good Fight Entertainment.

COOL TOUR 2010 begins on July 12th in Orlando, FL, and comes to a halt in San Francisco, CA on August 1st. A ticket pre-sale is available beginning Tuesday, April 27th, and tickets go on sale to the public Friday, April 30th -Sunday, May 2nd. Check your local listing for on sale dates near you. Tickets are available through all Ticketmaster locations and online at http://www.ticketmaster.com/, unless otherwise noted.

Also, starting April 27th, a VIP “Cooler Package” will be on sale to the public, along with general admission pre sale tickets. Fans will be able to purchase an Atticus COOL TOUR T-shirt, a signed tour poster, and a souvenir tour laminate for only $20 plus the cost of a ticket. Cooler Packages will be available through Ticketmaster while supplies last.

Starting April 26th, you can check out headliner AS I LAY DYING's brand new song "Parallels" streaming live (70% of track is available) on http://www.thepowerlessrise.com/. Also make sure to visit http://www.thepowerlessrise.com/ to check out their headline tour starting April 29th with Demonhunter, blessthefall, and War Of Ages as support. Their upcoming CD THE POWERLESS RISE is out May 11th on Metal Blade Records.

Many of COOL TOUR’s notable artists had a few words to say about this exciting new festival! “After taking last summer off to focus on writing new material, we'll be back out this year in support of our latest album, THE POWERLESS RISE,” states AS I LAY DYING guitarist Phil Sgrosso. “We've got a killer line up of bands that share the same passion for heavy music and putting on a great show every night for the fans. You don't want to miss a tour as good as this.”

“We're looking forward to get out on the COOL TOUR this summer,” states UNDEROATH guitarist Tim McTague. “2010 has been a transitional year for UNDEROATH, and we are looking forward to putting our new direction in motion.” McTague also adds, “COOL TOUR is the perfect place to come out and show everyone what UNDEROATH of the future will sound like.”

Booking agent Tim Borror of The Agency Group had some final words to say about COOL TOUR. “To say I'm excited about COOL TOUR this summer would sound too plain and generic. I’m more than excited; it’s my honor to work with the people putting this thing together behind the scenes and my honor to work with these bands. I already have great relationships with a few of these bands and I’m at the beginning of starting great relationships with the rest of them. Good times with good people making great music. Fuckin’ A, the COOL TOUR!”

The anticipation is building, so make sure to get your tickets soon for COOL TOUR 2010; sure to be a tour you don't want to miss!

Do not forget to check out COOL TOUR’s amazing sponsors! See below:

For more information on COOL TOUR, head to http://www.cooltour10.com/, or follow COOL TOUR on Twitter at www.twitter.com/cooltour10!

Here's what the other COOL TOUR bands are saying:

Eric Lambert of BLESSTHEFALL is pleased to be on the COOL TOUR bill. “It’s an honor to tour with bands that we have grown up listening to and are the reason we are in a band today. The venues are rad and it's definitely a tour where all the bands are going to kill it live. We couldn't be more stoked for this summer!”

"The coolest part about the Cool tour is that we're bros with half the bands already,” states CANCER BATS vocalist Liam Cormier. “The other half, we're going to force to be our friends! The whole thing is gonna be total flip flop mosh, parking lot bro down to the max!"

"This tour is going to be fucking sick,” exclaims Sam Carter, vocalist of ARCHITECTS, “The line-up has so many awesome bands! Our buddies in UNDEROATH and CANCER BATS are playing, so it’s already a guaranteed good time! We’re stoked to get back to the States and to eat Chipotle everyday! Hell yeah!”

Leroy Hamp of WAR OF AGES states, “With national acts such as AS I LAY DYING, UNDEROATH, BETWEEN THE BURIED AND ME, BLESSTHEFALL, THE ACACIA STRAIN, ARCHITECTS, CANCER BATS, this tour will be one of the most memorable tours this summer and shouldn't be missed. A huge thanks to Carl Severson and Paul Conroy of Good Fight Entertainment and Tim Borror of The Agency Group for asking WAR OF AGES to be apart of COOL TOUR!”
Email Post