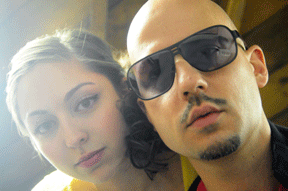 "It's a gritty electric popsicle," says Derek Nicoletto, one half of the New York City-based DEREK AND THE DARLING, describing his band's sound. "It's electric / indie / pop / rock," smirks Sammi Garett, the other half. "That’s a mouthful. Huh?"
Produced by Jamie Siegel (Taking Back Sunday, Kid Cudi, The Roots), DATD combines big melodic hooks with driving rock rhythms and electronic beats on Rockface. From the big anthemic kickoff of "Hustler with a Rescue Plan" to the propulsive midtempo rhythm of "Suddenly" to the sweet ballad "Alabaster Sky," the EP displays the different facets of the band without losing any of its cohesion. "Each song exudes unique qualities," comments Sammi. "They have a different vibe, a different feel, each telling a different story. But all of the songs have a common thread that weaves them together." Adds Derek, "It's nonstop comedy when we're not actually recording or in the midst of creating a song. Sammi and I were so goofy and during our sessions that our producer Jamie texted me after getting home one night, saying he was going to go on a 'Xanax drip'." Adding some extra oomph, Taking Back Sunday bassist Matt Rubano makes a cameo on the propulsive track "You." Continues Derek, "We really wanted a driving bass line and invited Matt to add his touch. As expected, his playing really made the song kick."
Rockface will be released on April 27, 2010 on 7 Trick Pony Records and Derek and the Darling are planning late Spring and Summer tour dates. "I've placed a lot of stock in Sammi," says Derek, looking toward the future. "I hope she doesn't end up some crack-addicted rock whore... unless that helps the band succeed, of course."