We Are the Fallen Debut In Stores This May 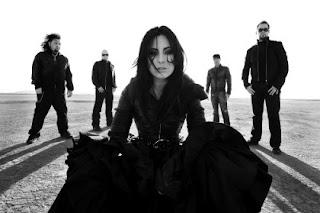 WE ARE THE FALLEN DEBUT ALBUM 'TEAR THE WORLD DOWN' IN-STORES ON MAY 11th - Debut Single ‘Bury Me Alive’ Available Now, WATF Featuring Ex-Evanescence Members and American Idol Vocalist Carly Smithson, Kick Off Tour With H.I.M. On March 26th

Universal Republic Records' compelling new rock brigade, We Are The Fallen, will release their debut album Tear The World Down on May 11th, 2010. The iconic band has already uncorked their scorching first single, ‘Bury Me Alive,’ making it available exclusively for the digital domain in the beginning of February.

The formidable five-some is comprised of the original members of multi-platinum trailblazing band Evanescence, guitarists Ben Moody and John LeCompt along with drummer Rocky Gray, joined by breakout American Idol finalist Carly Smithson on vocals. Acclaimed bassist Marty O’Brien (Disturbed and Static-X, among others) rounds out We Are The Fallen's unique sound.

The group will be making their live performance debut at Kings College in London on March 23 and has also lined up one of the spring’s most anticipated rock tours, gearing up for their debut U.S. road trek in support of Finnish rock band H.I.M., which rolls out later this month. The 28 city tour launches in Philadelphia, PA, on March 26th, crashing multiple major cities such as Boston, MA, on March 28th, Cleveland, OH, on April 1st, Chicago, IL on April 9th, Los Angeles, CA on April 23rd, and winding down in New York City on May 7th.

For Smithson, We Are The Fallen fulfills her destiny as one of rock’s most potent new female voices. She first turned heads as one of American Idol’s more engaging rock candidates, landing a controversial sixth place slot during Season 7 of the landmark television series, but not before gaining traction as one of the show’s most original and uncompromising new talents. The powerful vocalist’s ‘elimination’ sent shockwaves through the ‘Idol’ blogger nation, with her acclaimed performances on the 2008 American Idol Tour cementing her current reputation as a force to be reckoned with - possessing a riveting rock presence that is second to none.

Los Angeles bands’ Dommin and Drive A will also be joining We Are The Fallen and H.I.M.
On the upcoming tour: