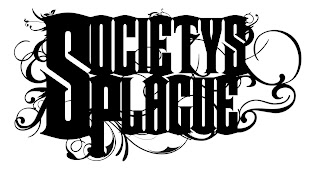 Stand and Deliver Records is pleased to announce it has inked a deal with the Lexington, KY metal band Society’s Plague.
Society’s Plague is a band whose passion for intense metal, breakdowns, and live performances will soon be seen by the metal masses worldwide when “The Human The Canvas” is unleashed later in the summer of 2010.
The band is currently putting the finishing touches on their Stand and Deliver Records debut album with famed producers Ben Schigel and Tony Gammalo, best known for their work with Chimaira, It Dies Today, Walls of Jericho and many more.

Kentucky’s, Society's Plague has been dropping jaws and moving bodies on the East Coast since early 2006. Since then they have been able to build a massive following with their unique blend of heavy breakdowns, fast metal riffs, powerful vocals, and symphonic keyboards.
In 2008 the band self released their debut EP “The Mercy Untold” with great success. Grabbing the attention of fans not only in the United States but reaching as far as Europe and Australia.
In late 2009 the band grabbed the attention of Cleveland, Ohio’s Stand and Deliver Records, shortly after the band inked a deal with the indie label. Society’s Plague are recording their debut album at Spider Studios with Ben Schigel and Tony Gammalo best known for their work with Chimaira, It Dies Today, Walls of Jericho and many more.

“The Human, The Canvas” will be the bands first full length studio album since the 2008 release of their EP “The Mercy Untold”. “The Human, The Canvas” will undoubtedly be a huge step forward for the band. With all the pieces now in place you can be certain that Society's Plague will be tearing up stages and moving bodies nationwide.
Society's Plague has shared the stage with many of today's biggest metal bands including: Disturbed, Killswitch Engage, In Flames, Chimaira, Lacuna Coil, Unearth and many more.