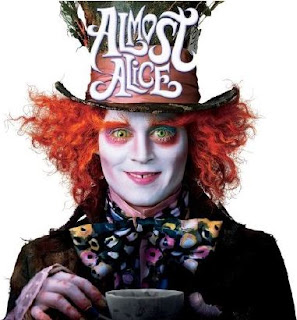 As should be expected with a soundtrack to a Tim Burton oddity (think Nightmare Before Christmas), “Almost Alice” is 16 massively submersive tracks with a slight gothic coating, written and performed by a heavy hitting cast. The record is littered with excellent songs, one right after the other, with only a few hiccups along the way, songs that just don’t seem to work in the grand scheme of things, such as Metro Station’s scene pitfall laden ‘Where’s My Angel’ and 3Oh!3’s (featuring Neon Hitch) synthy bounce fest ‘Follow Me Down. That duo bogs down the first half of the release, while Kerli’s ‘Tea Party’ and Wolfmother’s guitar, testosterone fueled ‘Fell Down a Hole’ represent some latter half follies, although the pros of “Almost Alice” heavily outweigh the short list of cons.

“Almost Alice” offers no shortage of standout tracks, some more surprising than others, and none more surprising than Avril Lavigne’s album opener, ‘Alice.’ She is near perfect in kicking things off, showcasing the fact that she can actually sing with passion, and not just go through the motion like she normally does. ‘Alice’ is just the first of many highlights off of “Almost Alice,” including ‘the Poison’ by the All-American Rejects and ‘Her Name is Alice’ by Shinedown. With ‘Painting Flowers,’ powerpop merchants All Time Low switch gears and show off their mature side, proving that they might be more than just a flavor of the week type of band. Tokio Hotel, with an assist from Estonian singer Kerli, add an air of goth to the record with the song ‘Strange, while the Plain White T’s (‘Welcome to Mystery’) and Franz Ferdinand (‘the Lobster Quadrille’) add some contemporary fuel to the proverbial fire, each doing their part in keeping things uber-interesting down the stretch run of “Almost Alice.”

Now, we have seen this style of songwriting before with the Plain White T’s as the band added their own personal touch to the track ‘Poor Jack’ for the 2008’s Nightmare Before Christmas soundtrack.

Blink-182’s Mark Hoppus is joined by ex-Fall Out Boy bassist Pete Wentz for the song ‘In Transit,’ which turns out to not only be one of the best treasures on the entire outing, but also one of the best track found here period. But, when thinking of the album’s best work, one need not look further than legendary Cure frontman Robert Smith’s ‘Very Good Advice.’ The enigmatic Brit lends his vocals luminosity to the song, which sounds almost an even keeled blend of “Wild Mood Swings” and “4:13 Dream” era Cure, and honestly, it would be hard for “Almost Alice” to be this good without Smith’s contributions.

To envision “Almost Alice” as a rousing success is as easy as judging a book by its cover, literally. All you have to do is read the track listing. With such a cavalcade of stars, how could the record possibly go wrong? Well, in all honesty, you probably could have, but luckily “Almost Alice” didn’t. At least there is no original recording from Johnny Depp or Anna Hathaway, because that probably would be the equivalent of audio torture. With that being said, “Almost Alice” is about as good as original movie soundtracks come.