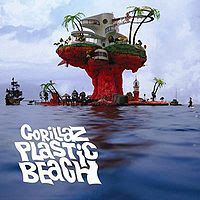 “Plastic Beach” is a larger sampling size of what Damon Albarn’s brainchild Gorillaz can accomplish on a much larger scale, successfully picking up somewhere around when 2005’s “Demon Days” left off, more in story than sound, as “Plastic Beach” seems to be somewhat of an evolution of sound for the once thought of joke band. After consumption of the this final product that was nearly half a decade in the making, it should be noted that Gorillaz no longer are a joke, or niche, band, they are in fact the real deal and Albarn’s new full time gig following the dissolution of his former outlet Blur. Well, Gorillaz are real to a point, as should already be understood.

For Gorillaz, this time around things are often a deep, moody affair, each track showcasing its unique individuality, although for the most part “Plastic Beach” is greater than the sum of its parts. Ultimately it is a concept album when speaking solely to the story and the setting, but musically things tend to be discernable from one song to the next. There are a lot of sounds entrenched on “Plastic Beach,” everything from retro 70’s disco and stylish synth-pop to electronically created blips and beeps and ambient noise. The record has the tendency to go off on tangents and become perhaps too immersive at times, causing certain listeners to become lost or even jaded to what the music is attempting to accomplish, but overall it is a fun journey from beginning to end. The record never fails to paint a vibrant and luminous atmosphere in the minds eye, which is just apart of its overall beauty.

Albarn must have gotten lonely in the studio as he emptied the contact list on his cell phone and brought in a whole cast of musicians to help out on “Plastic Beach,” a crew featuring the likes of Mos Def (‘Stylo’), Snoop Dogg (‘Welcome to the World of Plastic Beach’), the Velvet Underground’s Lou Reed (‘Some Kind of Nature’), the Clash’s Mick Jones and Paul Simonon (‘Plastic Beach’), Bobby Womack (‘Cloud of Unknowing’), De La Soul (‘Superfast Jellyfish’), Little Dragon (‘Empire Ants,’ ‘To Binge’) and the Lebanese National Orchestra for Oriental Arabic Music (‘White Flag’). But don’t be quick to assume Albarn cannot take care of business all by his lonesome – do a quick scan for tracks ‘Rhinestone Eyes’ and ‘Pirate Jet.’ Without the aid of outside influence, Gorillaz can effectively sway and produce thumping, bouncy rhythms and beats.

“Plastic Beach” is a more ostentatious event than we’ve seen in the past from Gorillaz, and even though the bands sense of urgency has faded into the background just a bit, partially replaced with a quasi-relaxed, lounge ready feel, it still does enough to register as the bands third straight triumphant album. If you’ve yet to spend time with Gorillaz, this album is a perfect spot to dive in and indulge. Be prepared to have some fun.