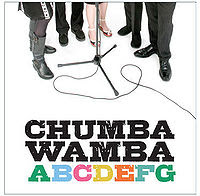 What’s that you say? Chumbawamba? Really? Chumbawamba? The same band that brought the incessant hit song ‘Tubthumber’ to the world 13 years ago? The same band that has almost vanished off of the commercial music radar ever since? Yes, the very same band. If it is surprising to you that the British band is still making music, it will be really surprising to you that “ABCDEFG” is the bands 17th, yes, 17th, studio album to date during their 27-year, yes, again 27-year, career.

“ABCDEFG” is a 17 track collection of folksy world music, songs that might be too indie to even be referred to as such. These are songs reminiscent of rousing sing-along ditties at your corner pub (listen to the stirring ‘Singing Out the Days’ but make sure you raise a pint while doing so), songs that call to mind a much simpler time. And that might be the best depiction of this record - simple. Though the albums stories are mostly heady, the music throughout “ABCDEFG” is as simple as it comes. It’s so simple in fact that it often fails to grasp the listener’s attention and hold on, and falls short of becoming entirely captivating.

The tenured vets are unabashed in their songwriting and storytelling this time around on “ABCDEFG,” putting pen to paper with songs like ‘Wagner At The Opera,’ an inspiring slow march written about a protest by a Nazi concentration camp survivor at a performance of a Wagner opera by the Israeli Symphony Orchestra and ‘Dance, Idiot, Dance,’ a response by the band to the right wing British National Party’s decision to infiltrate English folk music and ‘reclaim it’ in the name of racist bigotry. One more songwriting highlight is ‘Torturing James Hetfield,’ a bright and cheery tune about what the band would do if afforded the opportunity to both kidnap and interrogate Metallica’s lead singer. And apparently the band would make him listen to Chumbawamba’s Greatest Hits at maximum volume. Goodness, could you imagine the horror?

Grade: C
Listen to: ‘Singing Out the Days’
Email Post