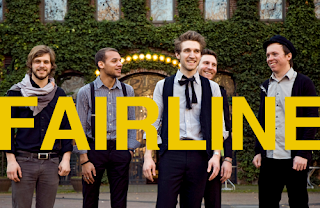 The much anticipated band, Fairline, featuring Nathaniel Moon, has released their single, "Need A Way Out," online for free download or name-your-own-price. Citing influences from Phoenix to Rufus Wainwright, Fairline have begun to create their own unique sound and place in today's musical landscape.

This all comes two years after the breakup of Nathaniel's former band, Ivory. He shares, "I used to be in a band called Ivory years ago and we were on the up and up in the indie scene. Our first tour we played for about three thousand people a night with our friends in Hawthorne Heights. They were at their peak, releasing their second record after their first went Gold and kind enough to bring us out to pop our road cherry. We had done a record with JT's (Hawthorne Heights) label, Carbon Copy Records. However, shortly after touring with Hawthorne [Heights] we heard the news that their band, meaning our label as well, was going to be involved in a lawsuit that would hold back our record and potentially our career. We were off the label and off the road. Ivory continued on for about another week or so and then within about two weeks of being home, our guitarist left, the band broke up, my girlfriend of two years at the time started dating my ex-roommate, I lost my car, and job. Everything I put my identity into was gone within two weeks. I was a wreck."

All of this was not enough to stop Nathaniel's dreams of sharing his songs with listeners. "I tried Starting Ivory again and tried finding myself again. I did end up learning a lot about who I am, why I am me, and why I believe the worldview that I do." Taking all this information and experience, Nathaniel moved to Brooklyn. "I worked with some hip-hop producers, tried my hand at falsetto R&B tracks [laughs]. Wasn't exactly what I am best at, but I learned so much about music."

After almost a year in New York, he received a call from two Ivory fans with a proposition. "My friends in The Maine were inspired to start their band because of my old band Ivory. They were all in eighth and ninth grade when my band had come through Phoenix. After we put unleaded in our diesel truck we ended up breaking down on one of the hottest days of the summer in Phoenix and ended up staying at Tim and Pat (The Maine's drummer) Kirch's house and left them a copy of our record. Little did I know they like the record until October 2008 when I got a call from Tim, who was now their manager, and Garrett Nickelsen, who plays bass in The Maine, who both really wanted to see me playing music again. These guys, who I now consider brothers, bought me a keyboard, made sure food was in my stomach, and had me open for them on tour back to Tempe, AZ." Nathaniel spent another six months working on songs in the desert living with Garrett and Trey Nickelsen in the family's guest room, "So much like Ryan from The OC. [laughs]." The music made with Trey and Nathaniel became the foundation of Fairline. However, another phone call changed Nathaniel's plan for his songs. "I got a call from a producer I had met the summer of 2008 in Chicago. His name is Chuck Gladfelter and is and amazing producer. Doesn't get enough cred. We hit it off right away and we started sending tracks back and forth via the internet."

"In May of 2009 I went to Chicago planning to just do vocals on four demos but before I knew it, September rolled around and I had management (Robert English), a lawyer, and was being flown to NYC with Chuck Gladfelter, Robert English, and the showcase band to showcase for Atlantic, Universal, Mercury, and Octone. It literally was a fairytale."

Nathaniel knew he needed a band to take these songs from recording and bring them to life on stage. He and Trey began the search to complete the lineup. Joseph Aldulaimi (guitar) heard a few songs and approached Nathaniel initially interested in managing the project. After finding out management was already in place, Joseph still wanted to help however he could and found Jake Randle (bass) and Cole Mauro (drums) to complete the equation. Trey and Nathaniel moved to Seattle in January 2010 and Fairline began. The band has worked tirelessly to perfect the songs, and reach as much of Seattle as possible. Gaining attention from Seattle top-40 station KISS FM as well a first show with popular local act, The Scene Aesthetic, Fairline is gaining momentum and is now prepared to properly introduce itself to the world.

Fairline has just released "Need A Way Out," the first single from their forthcoming EP. "We want to share our art and our process with as many people as possible" Nathaniel shares, "therefore we want to empower the LISTENER'S voice through value for value. Someone will download our music If they want to; we may as well provide them with high quality WAV files, and let them name their own price for digital music, starting at $0." This year Fairline will release three EP's and plan to continue empowering listeners in this fashion. "Need A Way Out" can be downloaded now at www.myspace.com/fairline and will be on iTunes 3/23.