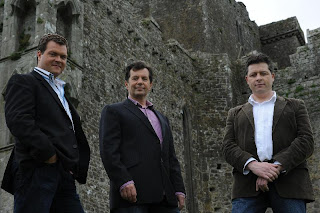 The Irish Tenors have released their new album, Ireland, which explores the depth of Irelands most famous and regarded songs. This collection of music pays tribute to traditional Irish heritage as well as modern Irish tunes. Included are songs "The Rocky Road to Dublin" originally performed in the 19th century by Harry Clifton, "Galway Bay" which has been a hit around the world for Irish emigrants, and the well known songs "Danny Boy" and "Whiskey In The Jar" (full track list below).
Download and share this free MP3 of "Beautiful Dreamer" HERE or at http://razorandtiepublicity.com/irish_tenors/downloads/irishtenors.php?file=beautifuldreamer.mp3
Enjoy and share this free stream of "Whiskey in the Jar" HERE or at http://mfile.akamai.com/2851/wma/razntie.download.akamai.com/2851/irishtenors/whiskeyinthejar.asx

"When searching for a title for our latest album, we decided to just call it simply 'Ireland', for this nation's musical tradition , like any respectable whiskey, has been maturing gracefully for thousands of years and when you settle down to listen to this fine album, hopefully it will pour you a glass of beauty and you will savour every drop and let your mind rest for a while on the island of Ireland. The Muses have been extra kind to the Irish and there is no shortage of songs (or whiskey!) and every album is a chance to bring you a different vintage, a collection that you will know and love. We wish you the very best of everything! Sláinte!" The Irish Tenors.
Email Post