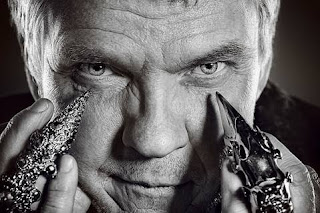 Roadrunner Records/Loud & Proud Records is pleased to announce the signing of Meat Loaf to the label. Meat Loaf has been a towering monument on the musical landscape for the past 35 years and his new deal with Roadrunner/Loud & Proud will allow him to retain his post as the pre-eminent voice in rock music and beyond.

His new album, Hang Cool Teddy Bear, whose title was taken from a line in Beyond the Valley of the Dolls, is 13 tracks of classic Meat Loaf, primed and ready for the 21st century. More than four decades into his career, the man and his voice are as big, bold and relevant as ever. The album features a hot producer, a slew of impressive guest appearances, ranging from guitar god Steve Vai to actor Hugh Laurie, and of course, Meat Loaf’s signature pipes!
"I wanted it big, I wanted it dramatic, I wanted a rock record,” Meat Loaf said about the new album. “Yes, it sounds like a Meat Loaf record. But it sounds different too: it sounds new, it sounds fresh. It speaks to you in a different way.” For Hang Cool Teddy Bear, Meat Loaf’s creativity was sparked by working with a new collaborator, producer Rob Cavallo (Green Day, My Chemical Romance, Paramore, Fleetwood Mac), a lifelong Meat Loaf fan who has worked with some of the most explosive names in rock music and who helped to foster a modern and contemporary vibe for the album. Of their relationship, Meat Loaf said, “Rob is the number one rock producer in the world because he leaves his ego out of the equation and gives an artist his voice, making it sound better than the artist could even imagine.”

Regarding Roadrunner/Loud & Proud, Meat Loaf is excited about his new label digs, saying, “In my bones, I've always been a rocker and I finally found a home that rocks.” Loud & Proud President Tom Lipsky also commented on the signing, saying “Meat Loaf has once again created a masterpiece and we are excited and proud to be his new label partner.”

“It's the story of a soldier,” revealed Meat Loaf. “He's been in battle and he's lying face down on the ground. He can't move, but he turns his head and starts to see blood run across the ground, and so he thinks he's going to die. They always say you see your life flash backward when you're about to die. But his life flashes forward - into what possibly could happen. He sees what his life could be: the good and the bad. The songs are the different scenarios he finds himself in. It's not always the same time or the same place, but it's always the same woman. But I don't want to give too much away. I want people to work it out for themselves.”

Hang Cool Teddy Bear also features a stellar array of big-name guests, including Steve Vai (who appears on ‘Love is Not Real’), former Queen guitarist Brian May (who appears on ‘Song of Madness’ and ‘Love is Not Real’), American Idol judge Kara DioGuardi (who co-wrote and sings on ‘If I Can't Have You’) and Hollywood star Jack Black, who duets with Meat Loaf on ‘Like a Rose.’ Additionally, English actor Hugh Laurie of TV’s House fame has a cameo on the album, playing piano on ‘If I Can’t Have You.’ The pair met after Meat Loaf guested on Laurie’s hit series and discovered the star was a classically trained pianist.

Hang Cool Teddy Bear is due out May 11 in the US.

While Meat Loaf certainly requires no introduction, he burst onto the world music stage in 1977, with his landmark release, Bat Out Of Hell, which transformed him from a stage actor into an American rock ‘n’ roll icon, as the album sold more than 43 million copies worldwide and is the 3rd biggest selling record of all time. Following Bat Out Of Hell with further masterpieces like 1981’s Dead Ringer, 1984’s Bad Attitude and the Bat Out Of Hell sequels, 1993’s Bat Out Of Hell II: Back Into Hell and 2006’s Bat Out Of Hell III: The Monster is Loose proves what Rob Cavallo believes about Meat Loaf: that he has more rock ‘n’ roll in his bones than anyone he’s ever met.
Email Post