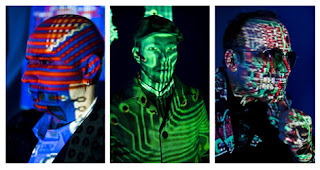 Metal Blade Records signs hard rock band RETURN TO EARTH featuring Chris Pennie of Coheed & Cambria (ex-The Dillinger Escape Plan)
Metal Blade Records set to release second full-length album from the Jersey-based band comprised of vocalist Ron Scalzo, guitarist Brett Aveni, and drummer Chris Pennie
Metal Blade Records is pleased to announce the signing of Jersey-based aggressive hard rock outfit RETURN TO EARTH featuring the talents of Ron Scalzo, Brett Aveni, and Chris Pennie (current drummer of Coheed & Cambria and former drummer of The Dillinger Escape Plan). RETURN TO EARTH has already finished writing and recording Automata, the follow-up to the band's 2007 debut Captains of Industry, and is set to release the behemoth this summer.
RETURN TO EARTH comments; "After self-releasing our first album, Captains of Industry, and discovering a heavier, more intense sound during the recording sessions for Automata, the three of us agreed that the scope of the band's vision would benefit from the support of a bigger, like-minded record label - one that had similar musical influences and an appreciation for our DIY 'studio geek' mentality. Also, a label we felt we could trust and depend upon to promote our songs properly. Metal Blade was always at the top of our very short wish list of potential partners, and so we were thrilled to discover that Brian Slagel and Metal Blade were as enamored with us as we were with them. Signing with Metal Blade is an affirmation of our hard work, and we are psyched to have them in our corner for the release of Automata!"
Brian Slagel adds; "I have been a big fan of Chris Pennie for a long time and we all at Metal Blade are very excited to work with Chris and the rest of RETURN TO EARTH."
RETURN TO EARTH's music is highlighted by the awe-inspiring precision of Pennie's backbeat, Aveni's catchy rock hooks, and Scalzo's sing-and-scream, harmony-heavy vocals. Explains Scalzo, "We're all passionate about music, and have a shared affinity for classic metal & modern-day rock with lush production. We're three guys with three different perspectives but you can hear all those influences in our own tunes, loud & clear." As with all great bands, when RETURN TO EARTH make music together, the disparate influences and personalities coalesce into a single vision. Adds Scalzo, "Most of all, we each draw inspiration from the other guys' strengths - whether a riff, a rhythm line, or a vocal hook - it doesn't take much to ignite our respective fires, and that usually culminates in something heavy, different, and ultimately, inspirational. We're all really proud of this record."
Email Post