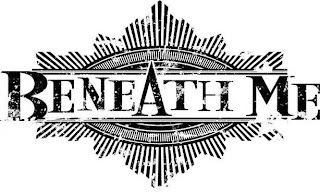 The Windy City does not have the strength to sustain the sonic hurricane of sound that is BENEATH ME. BENEATH ME is a modern rock powerhouse that has the drive, determination and ambition to become the next big thing on the hard rock scene.

BENEATH ME is the amalgamation of two Chicago outfits that both met their demise in 2007. The first of which featured twin brothers Mikey Vujasin (Rhythm/Lead Guitar and Backing Vocals), Andy Vujasin (Drums) and George Sack (Rhythm/Lead Guitar and Backing Vocals). The second band was helmed by bassist, multi-instrumentalist and composer Johnny Drugan. Members of both groups were mutual partners in crime, so after the demise of their respective bands it was only natural for them to get together to form what would become BENEATH ME.

From their inception, they started working together with a singer they immediately felt a connection with. The band spent hours upon hours writing and recording material for what was to be their debut release. With the record finished and a distribution deal secured and in place, BENEATH ME was ready to unleash their sound upon the masses. Due to personal problems the original singer was not able to tour behind the record and hence it was never released. At this point BENEATH ME decided that they would start over again with new vocal melodies and lyrics. This process spawned full reconstruction of songs and parlayed the band into a whole new realm of composition and inspiration.

In 2008 BENEATH ME started the quest for a new singer utilizing their street team, MySpace and Facebook pages as well as local word-of-mouth. Soon after, the band was receiving submissions from across the continent. If the band dug what they heard, songs would be sent to the prospective vocalist to see what the candidate was able to do with their tunes. The day they received a demo back from Montreal native Franco ‘V’ Roc, they were blown away and immediately flew him out to Chicago . It wasn’t long after that he was chosen to be the new front man for BENEATH ME.

Bassist and co-producer Johnny Drugan spoke on their latest recording process. “We utilized the pain we had endured by converting it into positive energy, this gave us our end result which was living proof that everything does happen for a reason." Guitarist and co-producer Mikey Vujasin said "we wanted to keep the record organic and raw. When listening to it from beginning to end it creates an overall story that takes listeners to another realm.”

After a year in the studio with their new singer, BENEATH ME emerged stronger then ever with a sound all their own. The recording sessions spawned their debut masterpiece, “Wish I Wouldn’t Care.” Johnny commented on the significance of the album’s title, “When we did this record it was an exercise in futility trying to not relive what we had accomplished on our previous record…the music that had our blood, sweat and lives engrained in it was wasted because one person couldn't get himself together. I found myself thinking, I wish I wouldn't care anymore... but I do".