Have You Heard? A Few Moments with Travis Nesbitt of Social Code 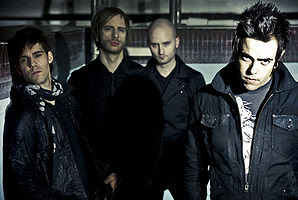 Have You Heard? A Few Moments with Travis Nesbitt of Social Code
http://www.socialcodemusic.com/

These guys haven’t made it big in the United States...yet. That could all change once their US debut, “Rock ‘N’ Roll,” hits store shelves come March 23. They are already a big time hit north of the border in their home country of Canada and now have their eyes set on bringing that wave of popularity/momentum south, to the US, and given the strength of their new disc, it might not be as tall a task as you think. The bands gritty and raw take on nu-rock sleaze might be just what the genre needs, a swift, testosterone fueled kick in the pants, especially after their fellow countrymen Nickelback all but ran it into the ground. Let’s hope for the best once the Edmonton boys come stateside.

I caught up with vocalist Travis Nesbitt in order to get the dirt on all things Social Code – literally, from their humble Canadian beginnings, the difference between the Great White North and these United States, and how their last record, “Social Code,” came together.

Get eXposed Music: How did Social Code get together as a band?
Travis Nesbitt: Logan (Jacobs, bass) and I have known each other since JR High School and have been playing together ever since. Over time we ended up meeting Ben (Shillabeer) and started the band. Morgan (Gies) came along when our old guitar player left.
GE: Do you all share common musical likes?
Nesbitt: We do, we all like good well crafted music regardless of the genre.
GE: Who are some of the bands influences?
Nesbitt: Anything from Sinatra to Bon Jovi to Foo Fighters and Kings of Leon - we're not picky.
GE: Was it hard to make the jump from playing in Canada to playing in the states?
Nesbitt: We haven't really spent any time in the touring US. We've recorded and played here and there but not in the same way that we tour Canada.
GE: Are the musical landscapes, or ‘scenes,’ different? And if so, how?
Nesbitt: We hear from other bands that are friends of ours that the shows tend to be bigger and more enthusiastic in the US. It's pretty damn good for us up here in Canada, so if that's the case we're excited to get down there!
GE: What’s it like touring in Canada as opposed to in the states?
Nesbitt: Lots and lots of driving. Due to the fact that Canada is a tenth the size of the US there's a lot less places to play, you can find yourself driving up to 13 hours between gigs.
GE: Now, onto the record. How come you decided to handle the producing duties yourself?Nesbitt: That really came from a lack of budget to hire anyone. It was either figure out how to build a studio and learn how to produce or not do a record. If we didn't do a record we would have probably broken up. It was a pretty easy decision because we knew we could do it if we just worked at it. Any of the successes we have ever had came from that line of thinking. It was a natural evolution for us.
GE: Do you think the songs turned out better?
Nesbitt: I'm not really sure. Maybe they could have been better if we had a big producer, or maybe worse, but we love every song and that's all that matters.
GE: Will it stay this way moving forward?
Nesbitt: Over the last few months we've been recording demos in the same way and we've been coming up with some really cool stuff. That being said we're going to be working with John Travis (Kid Rock, Buck Cherry, Social Distortion) on our new album. We're excited to get some fresh ears in the mix and see what comes out.
GE: Is it a conscious effort for the band to be positive in the things that it does? Do you try to put that into everything that you do (songwriting, touring, etc)?
Nesbitt: Yeah for sure! You can get pretty jaded pretty quick in this industry. We just wanna keep our heads and focus on what matters, writing great songs.
GE: Tell me about the video for ‘He Said, She Said.’ Who directed it? And how did you decide on that video idea?
Nesbitt: The director is a good friend of ours by the name of Colin Minihan and the concept was to take all our video money and screw around for the day (laughs). That's pretty much it. Colin collected our ideas and made them what you see but we just wanted to do a fun video.
GE: What’s next for Social Code?
Nesbitt: Our plan is to hit the US in a big way... tour, tour, tour. See you soon!
Email Post