Have You Heard? A Few Moments with Ben Grant of the Status 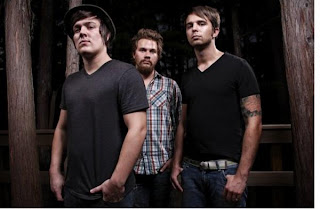 Have You Heard? A Few Moments with Ben Grant of the Status
www.myspace.com/thestatus

The Status have a few releases under their belt, including the full length “So This is Progress,” and also have another on the way in the EP “Let’s Be Honest.” The Doghouse Records recording act also have some friends in pretty high places, those being Taking Back Sunday frontman Adam Lazzara, who sang on a track off the bands 2008 full length, and band manager/Bayside frontman Anthony Raneri. So, with all those things to their credit, you could say the band is doing pretty well for themselves.

Following the departure of Adam Thompson a few years back, the band continued on as a three piece, which is their present form, and they have not lost a beat, at all. Singer/guitarist Ben Grant took a few precious moments to sit down with me and go through the Status with a fine tooth comb – from how they put their sound together to how their friendships with both Anthony and Adam came about.

Get eXposed Music: Let's start at the beginning. How did the Status come to be?
Ben Grant: Andy (Thompson) and I just began writing songs, we really just wanted to just keep it casual and write songs just for fun, not even to perform. We wrote hundreds of songs over a course of a few years and then decided to put a band together. Danny (Grant), (my brother) played bass, and around the same time we met Mike (Felker) and asked him to play drums.

GE How did you go about crafting your current sound?
Grant: After years of being a fan of music, and spending time studying other artists and writing and writing and more writing. Knowing the more you write and perform the more you'll encounter and experience, which will always help you become a more well rounded artist.

GE: Who are some of your musical influences as a band?
Grant: Some of the artists that have had the most influence on us are Weezer, Jimmy Eat World, and Ozma.

GE: Let's talk about the record. Who produced it and how did you go about choosing them?
Grant: George Fullan and Kenny Gioa produced the record. We have been friends with George for a while and he had helped produced some demos we did a few years back. We felt super comfortable with him and trusted him as a producer. Kenny has a huge resume that includes a ton of artists that we respect. We immediately knew we made the right decision once we began the recording process. It was an amazingly easy, fun, and productive experience.

GE: Tell me about the recording process of 'So This is Progress.'
Grant: We spent 5 weeks in Queens, New York this past summer. It was a great experience all the way around. Being in NY is always inspiring and to be making a record there was pretty amazing. Overall it was a lot of fun and relatively stress free, and I think we came out with a great record.

GE: What was the writing process like? Was it long and drawn out, or did it come together pretty easily?
Grant: Well like I mentioned before, we've had a few years to write and prepare for an opportunity like this. I write all the time and this was just our chance to pick out the strongest 12 songs for our first record. I re-wrote some lyrics in the studio, but for the most part we were all ready to go once got this opportunity.

GE: Listening to some of the lyrics (and even the album title), one could take some of the material as uplifting or borderline motivational. Was that the idea when the record was being written?
Grant: Yeah definitely, although it was more for us than anyone really. Just the idea that life can be tough sometimes, but it's important to keep your head on and your heart strong. We're like a family in this band, and have been through a lot together. So these songs are just about life and not giving up. Really that simple! Our hope is that people can take away something to remind them to keep fighting. However that looks for them.

GE: Could it be considered almost as a concept record?
Grant: It's not really a concept album. I think some of the themes are overlapping and that just because this is the season of life we're in as a band.

GE: Tell me about your relationship with Adam Lazzara and Anthony Raneri. How did you go about getting them to contribute to the record?
Grant: Anthony has been a good friend of ours for almost 2 years now, and as our manager, we knew we wanted him to contribute to the record. It turned out great and I think his vocal on ‘So This is Progress’ makes the song even more of an anthem about being strong. Taking Back Sunday was using the studio we recorded at during one of the days we were there. Our producer George actually grew up with Ed, one of TBS's guitarists, so Adam had already heard our band, and when they were there, we were all introduced and just basically hung out while they recorded. We jokingly kinda just asked Adam to sing on the record, and the next thing we knew he was in the vocal booth, and him and I were talking back and forth about ideas. Something I'll always remember, it was really amazing!
Email Post