Get ASIA’s New Single “FINGER ON THE TRIGGER” For Free 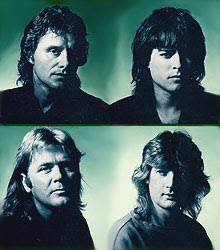 ASIA and AOL join forces to bring you an exclusive track off the bands new release OMEGA on Frontiers Records. FINGER ON THE TRIGGER is the first single and can be yours free at:

www.aolradioblog.com/2010/03/02/asia-finger-on-the-trigger-free-mp3-download
ASIA, rock’s first important super-group of the 80s - featuring members from Yes, Emerson Lake & Palmer, King Crimson and The Buggles – will release Omega, its highly anticipated new album of original material. The record is due in the spring of 2010 on Frontiers Records.

Geoffrey Downes, Steve Howe, Carl Palmer and John Wetton, the four original ASIA members, reunited in 2006, twenty-three years after all four had last played together. The much publicised reunion resulted in highly successful world tours, a double live LP and DVD (entitled Fantasia: Live In Tokyo) and an acclaimed studio album Phoenix in 2008 which debuted at number 73 in the Billboard charts in the USA and entered the top 100 in several European countries.