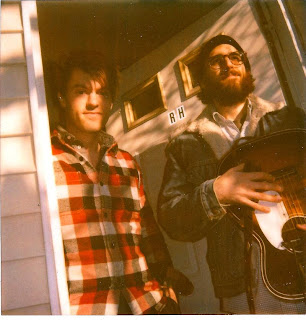 With a title like At Echo Lake, the fifth album from New York's Woods intimates a modern rock aesthetic fully informed by historical manifestations of teenage along with a concomitant feel for the specifics of time and place. The distance between 2007's At Rear House and 2010's At Echo Lake may at first seem only semantic but it more properly represents a move from a kind of informal back porch jam ethos to a fully-committed vision of the infinite possibilities of group playing. Over the past few years Woods have established themselves as an anomaly in a world of freaks. They were an odd proposition even in the outré company of vocalist/guitarist/label owner Jeremy Earl's Woodsist roster, perpetually out of time, committed to songsmanship in an age of noise, drone and improvisation, to extended soloing, oblique instrumentals and the usurping use of tapes and F/X in an age of dead-end singer-songwriters. Recent live shows have seen them best confuse the two, playing beautifully-constructed songs torn apart by fuzztone jams and odd electronics.

MP3: "I Was Gone" -http://www.forcefieldpr.com/woodsiwasgone.mp3

"At Echo Lake" will see a May 11 release through the Woodsist.