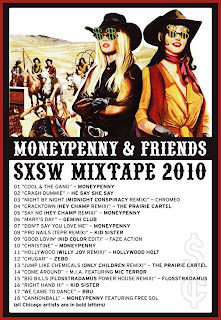 Moneypenny is an alluring female electro pop duo born from Chicago's burgeoning Nu-Indie scene and poised to pop in 2010. Though the group has yet to officially release any music, they've licensed three songs to ABC, played Lollapalooza and performed at key tastemakers events in LA, SF, New York and Chicago. They've opened for acts like Robyn, La Roux, and Chromeo and have their own established Chicago club night - SPANDEXXX - which has welcomed acts like Miike Snow, Dragonette, The Golden Filter, and more to the Windy City. http://www.enpriseentertainment.com/moneypenny/MoneypennySXSW2010Mixtape.mp3

Tastemakers in their own right, Moneypenny have partnered with the Chicago-based ColorJar Venture Accelerator (of which Priceline founding member Jeff Hoffman is a partner) to form Loose Change Recordings, a new-model record label/media company celebrating the music, lifestyle and culture of Chicago's Nu-Indie scene. Look for Moneypenny's debut EP this spring/summer via Loose Change, with a number of subsequent releases from great Chicago-based talent to follow. In the meantime, the girls of Moneypenny are dropping a SXSW-inspired mixtape featuring snippets of songs from their forthcoming EP, as well some of their favorite tracks to have come out of the Windy City over the past couple of months. Download it for free above.