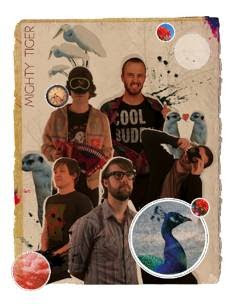 With its members emerging from the Midwest and the Southwest, this particular collection of musicians found their counterparts in the dreary Pacific Northwestern Seattle, WA. Drawing from a diverse set of influences ranging from Harry Nilsson to The Flaming Lips, Mighty Tiger applies vintage pop sensibility to indie rock innovation, creating a sound that is uniquely their own. Forming in November 2008, Mighty Tiger wrote and recorded their debut full length album, Western Theater within the next 5 months.
Western Theater is a testament to the vision of Mighty Tiger: conceptual, cohesive, and relaxed. Sure, Mighty Tiger’s spectrum of inspiration is apparent, with nods to the sonic landscapes of Pet Sounds and Perfect from Now On. But while Mighty Tiger shows a refreshing willingness to wear its musical influences on its sleeve, the primary strength of the album is the way the band’s divergent points of reference coalesce around a sound that is truly distinct and often tastefully unpredictable; whimsical chamber pop eddies swirling in a turbulent sea of epic indie rock glory. Mighty Tiger have formulated an atmosphere in Western Theater as accessible as it is intellectual, as somber as it is light-hearted. One thing is clear about this record and about this band: Mighty Tiger wants its listeners to have as much fun listening to Western Theater as the band had making it.
Stream the full Mighty Tiger album at AOL/Spinner here: http://www.spinner.com/new-releases#/22
Email Post