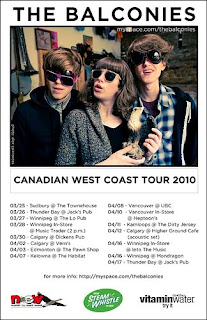 Toronto, by way of Ottawa's The Balconies announce their first west coast Canadian tour as well as Ontario tour dates. Before heading out west to Vancouver and back, the band will showcase their undeniably catchy pop rock at Canadian Music Fest where they are playing at ChartAttack's showcase Saturday, March 13th at the Horseshoe Tavern alongside The Wooden Sky and Two Hours Traffic.
The band has had a terrific year; 2009 saw the Balconies featured on the cover of Ottawa's street weekly VOIR and named a band to watch in 2010 by the National Post. They will spend the majority of 2010 on the road supporting their debut self titled release. The band recently shot a music video for "Serious Bedtime" in Montreal which will be serviced shortly.
DOWNLOAD The Balconies single "Serious Bedtime" here: http://drop.io/seriousbedtime
http://myspace.com/thebalconies
http://steamwhistle.ca
Email Post