Free Music! Ariel Pink's Haunted Graffiti - 'Round and Round' 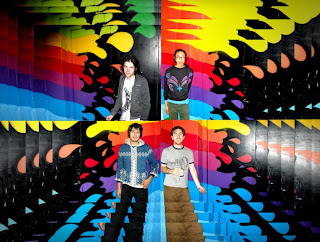 Currently adding the final flourishes to their forthcoming 4AD studio album (details to follow soon), Los Angeles outfit Ariel Pink's Haunted Graffiti will release 'Round and Round' on April 26th as a limited 7" and digital single.Evolved from a solo venture into a fully-fledged band (currently comprised of protagonist Ariel Pink, Kenny Gilmore, Aaron Sperske and Tim Koh) 'Round and Round' and its flipside 'Mistaken Wedding' are collaborative efforts that showcase the West Coast act's classic motif of hazy nostalgic and experimental pop.

"Round and Round" will see an April 26 release.