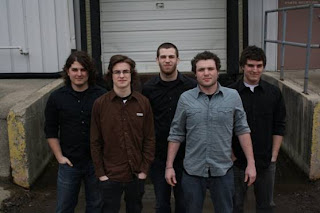 Indianapolis, Indiana’s own THE CONTORTIONIST are pleased to announce their signing with GOOD FIGHT MUSIC. THE CONTORTIONIST have worked hard to earn a loyal hometown following through consistent regional shows, coastal touring and two self-released EPs. Their ability to dole out their sounds to epic proportions in a live setting peaked the interest of the record label GOOD FIGHT MUSIC, so in early 2010, shortly after the staff had caught them live, a deal had become imminent.
Guitarist Robby Baca had the following to say about working with GOOD FIGHT MUSIC: “We are very excited about joining the GOOD FIGHT family. We are confident that their experience in the record industry is exactly what we need to make what we love doing our career. We look forward to fighting the GOOD FIGHT with these fine folks.”
THE CONTORTIONIST have tapped UNEARTH’S Ken Susi to produce their debut full length album in early Spring of this year. When asked about what drew him to the band Susi said the following, “THE CONTORTIONIST is not your typical/run of the mill band. Lots of bands in this day and age are copy cats or just plain old rip offs of other bands. This is truly an original band, from the overall look, sound and structure of the songs.”
THE CONTORTIONIST plan on releasing their album in mid to late Summer of 2010, with tours all across the US leading up to and surrounding the release.
For more information on THE CONTORTIONIST be sure to visit: