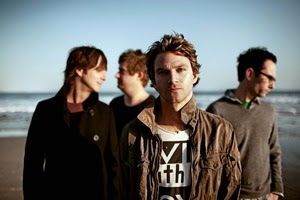 AMERICAN HI-FI is ready to FIGHT THE FREQUENCY and back to their roots with their fourth studio album, due out June 22 on their own label, Hi-Fi Killers/The Ascot Club (through Megaforce/RED/Sony). It’s the highly anticipated follow-up to 2005’s HEARTS ON PARADE (Maverick). It was produced by singer/guitarist Stacy Jones and recorded at his studio in Los Angeles, The Deathstar.

As Jones recently explained on Altpress.com: “I think we've circled back to the first record in terms of sonics and style. We've moved back to big, riff-driven guitar parts with melodies on top and a slightly harder edge.” Jones later added, “In the past, there was always the pressures and expectations that came from being on a record label. Now, we have the freedom to put the business aside and just play rock music like we always wanted!”

So what’s the band been doing for the past five years? They’ve mostly been busy with Miley Cyrus. Singer Stacy Jones has been her music director and drummer, while Jamie Arentzen has been her guitarist. They’ve both been featured in everything and anything Miley Cyrus, including the 2009 movie and “Best Of Both Worlds” concert film/DVD. Jones has also produced records for artists such as Ingrid Michaelson, Meg & Dia, The Cab, Plain White T’s, and many others.

Over the course of their 10-year career, American Hi-Fi has sold over 1 million albums thanks to hit singles such as the Top 10 smash “Flavor Of The Weak,” “Another Perfect Day” (which was used as Coca-Cola’s theme for the 2002 Winter Olympics) and “The Art Of Losing,” and they’ve toured the world with artists such as Elvis Costello, Matchbox Twenty, Bon Jovi and Fall Out Boy. Before teaming up as American Hi-Fi, the band members performed as part of various influential bands from the ‘90s Alternative Rock scene, including Veruca Salt and Letters to Cleo, and with Tanya Donelly, Tracy Bonham, Aimee Mann, and Juliana Hatfield individually. Their songs have been heard on TV shows and commercials such as Coors, Labatt Blue, Verizon, “Boston Public,” “24” and “Dawson’s Creek,” video games including “Guitar Hero 3,” and in movies including “American Pie 2,” “Freaky Friday,” “Van Wilder” and “Superman Returns.”