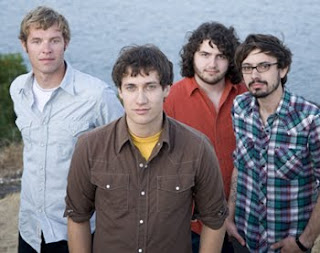 Warner Music Group's Independent Label Group is proud to announce a partnership with Trans Records, Chris Walla of Death Cab For Cutie's new label. Walla's first signing: The Lonely Forest. Based in the small town of Anacortes, WA, The Lonely Forest have taken the northwest by storm behind their independently released album We Sing The Body Electric!. The band's shows in and around the Seattle and Portland areas have built a rabid fan-base culminating with sold out shows at Seattle's Showbox Theatre last year and a coveted slot at the northwest's premiere festival this May, Sasquatch. Walla initially approached the band about producing their next album, but soon decided to create the Trans imprint with ILG to release their records as well.

“I’ve been lucky enough to make records with tons of phenomenal bands, and I’ve considered [starting a label] a number of different times,” Walla tells The Stranger. “I don’t know—is it oversimplified to say it’s them and it just makes sense? This wouldn’t be happening if it weren’t for the Lonely Forest. They’re a phenomenal band. I’ve been following my nose for so many years, doing the things that felt like the right thing to do. And this time the answer was yes.”

The Lonely Forest - John Van Deusen (Vox/Guitar/Piano), Braydn Krueger (Percussion), Eric Sturgeon (Bass), Tony Ruland (Guitar) - is set to record their debut album for Trans with Chris Walla at studios in Los Angeles, San Francisco and Portland throughout April and May with the album slated for a late summer/early fall release. The band is currently on tour with We Were Promised Jetpacks (dates below) and will be playing a number of shows at SXSW 2010.

Download "We Sing In Time" MP3 via KEXP's "Song Of The Day" feature.

"{The Lonely Forest are} incredibly talented—their songs are blasts of power pop and rock laced with piano and epic choruses that are fun to sing along to. The lyrics are thoughtful, but they're not too precious to stomach...The Lonely Forest are going to be famous." - The Stranger
"...powerful hooks that have an undeniably gravitational pull.” – SoundNW Magazine