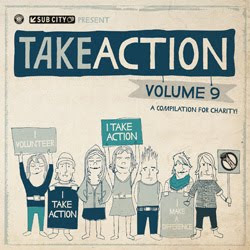 It’s really hard to argue with a kick ass double disc collection of 35 songs with a bargain price tag (about $6), especially when nearly half of these tracks are previously unreleased. But when you factor in the fact that proceeds from sales of the CD set go to benefit various charities, 5% to be exact, it has the making of a must-own record, a description fit for this collection.

It’s crazy to think that this is the 9th installment of the Hopeless Records/Sub City “Take Action” compilation, but as they say, time flies when you’re having fun, or in this case, time flies when the albums are this good. The first disc is where this comp. is worth its weight in gold, but the second disc isn’t anything to sneeze at. It’s just the first disc offers a better sample size of songs, 11 of which are acoustic, 13 of which are unreleased. We the Kings kick things off in back-to-back fashion, with the traditional Take Action PSA and then a strong willed acoustic rendition of what they call one of their favorite songs in Jimmy Eat World’s ‘the Middle.’ Things only get better from there, bouncing from acoustic offerings from Mayday Parade (‘the Silence’) and There for Tomorrow (‘Backbone’) to new studio tracks from the Ready Set (‘Drain Notes’) and A Rocket to the Moon (‘Fool Everyone’). The gem of the record is the Summer Set’s acoustic take on their song ‘Punch Drunk Love,’ although it’s quite possible it gets overlooked due to its surrounding star power.

Where the first half of “Take Action Vol. 9” was wrought with unplugged six string efforts, remixes run rampant throughout disc 2, the best of which, surprisingly, is Joey Sturgis’ remix of Let’s Get It’s ‘Maps,’ and not Innerpartysystems’ take on Cobra Starship’s ‘Hot Mess.’ The Tek One mix of Bring Me the Horizon’s ‘Sleep With One Eye Open’ misses wide of the mark, but Taking Back Sunday’s live version of ‘Swing’ makes up the lost ground a few songs later. The combination of tracks from the Downtown Fiction (‘I Just Wanna Run’), Set Your Goals (‘the Lost Boys’) and Broadway Calls (‘Jump at Shadows’) causes the record to fade fast down the stretch, but luckily other 75% of this disc nullifies that.

Sometimes it’s all about how well you start, not how you finish.