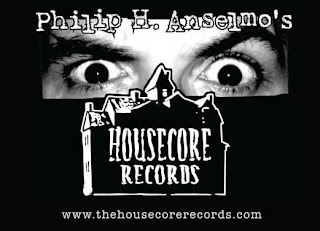 PHILIP ANSELMO SPEAKS ABOUT THE CREATION AND MISSION OF HOUSECORE RECORDS

HOUSECORE RECORDS (HCR) is the definitive collection of Philip H. Anselmo’s side projects from past to present, and the advancement and release of projects he believes in creatively. The idea of HOUSECORE records was first concocted in the early to mid 90’s at Philip’s earliest address by the lake (AKA Colbert Street) after leaving Texas to return to his hometown of New Orleans, LA. Philip’s house was a primary catalyst for the entire project.

HOUSECORE RECORDS is most definitely an outlet for heavy music, but they a have a lot more to offer from their diverse roster of musicians. This is showcased on the second disc of their HOUSECORE RECORDS compilation which is available now.

Label head and founder Philip Anselmo commented on HOUSECORE: “HOUSECORE RECORDS (HCR) is something I've needed to do. In 1993, the day after the sound proofing was completed and the gear was loaded into the downstairs practice room on Colbert St, the "HOUSECORE Sound" was birthed.
It was an extremely important thing that DOWN, SUPERJOINT RITUAL, SOILENT GREEN, CHRIST INVERSION, BODY AND BLOOD, THE DISEMBODIED, SPIRIT IN THE ROOM etc all jammed, practiced, wrote, and/or demoed there. Out of those bands came several spin-off groups, even more side bands and prospect projects to be."

"The creativity in that house was amazing, and soon thereafter, when I'd head back out on tour with PANTERA throughout the rest of the '90's, all that could be heard pouring out of my dressing room was HC music. Too many people liked the stuff. They'd beg for copies, but alas, if they hadn't brought a cassette tape with 'em, they were shit out of luck...

Fast forward to the present, well, the HCR idea has grown. The '90's stuff I'd done still stands the test of time, so people deserve to hear it."

"As far as the new bands are concerned, the fact that I'm investing in them speaks the obvious. Do I think these bands are gonna be swimming in cash, or the next big thing? Not necessarily. But do I think they're offering-up something fresh and different to the existing, vast music scene? Yep. That's the important thing for me.”

April 27th will see the first two releases from HOUSECORE RECORDS for 2010. Texas thrashers WARBEAST will be releasing Krush The Enemy. When asked to describe WARBEAST Philip said, “WARBEAST is pure, relentlessly executed Thrash at its best. Absolutely Ripping! I know that sounds generic, but WARBEAST isn't. Don't get me wrong, they're influenced by great bands from years gone by, but what sets them apart is the execution and variety of styles explored. The end result is original sounding, and "Void Filling" to my 'Thrash-keen' ears! Plus, I've grown up with these cats, so I know they're the real deal."

The other release will be from THE SURSIKS entitled I Didn’t Know I Was Singing. Let's get this straight, THE SURSIKS are NOT METAL nor HARDCORE, but they're undeniably just as extreme.

THE SURSIKS have been dubbed "The masters of musical reverse engineering", and on this album they've taken 16 phone messages from the answering machines of family and friends and set them to music. The result is a truly brilliant, hilarious and mind-altering concept album that will change the way that you listen to the human voice out in the real world. Says Philip: "Each 'song/message' is it's own musical adventure. From Detroit style Rhythm and Blues, to dramatic strings and timpani drum driven pieces, with hilarious and tragic topics abound, THE SURSIKS are the epitome of 'different', and a stark reminder to any band out there, that all the notes haven't been played yet, so to speak. Totally original. Completely brilliant."

HOUSECORE has many more sonic, eclectic releases planned for 2010 including:
ARSON ANTHEM’S first full length (17-songs of vicious HARDCORE!), a new full-length from haarp (Crushing, resolute and epic), THE MANSON FAMILY SOUNDTRACK (Featuring tracks from BODY & BLOOD, THE DISEMBODIED, and the original version of 'Creepy Crawl' from the 1995 SUPERJOINT demo), the debut release from the entrancing SKY HIGH, and an extremely heavy live album from CROWBAR. Stay tuned for more upcoming releases from HOUSECORE RECORDS.